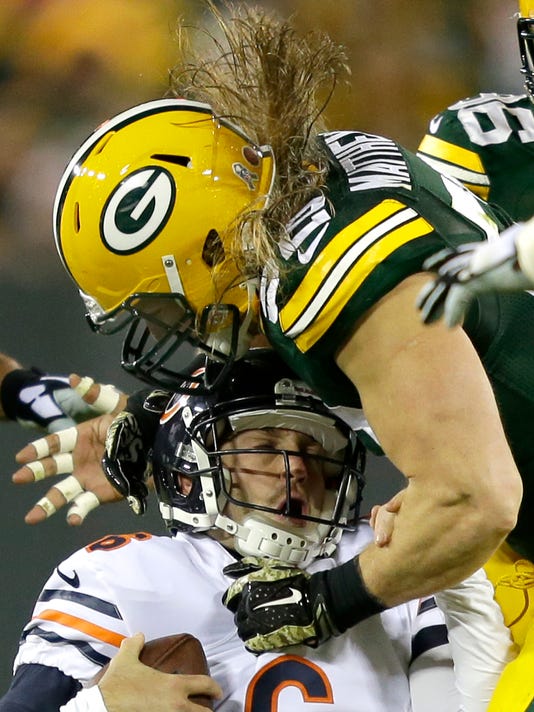 On Matthews move to ILB:
Clay Matthews is not an inside linebacker. He's a football player. We talked about it in OTAs, it was the plan to move Clay around and use more players on defense. We'll see where he plays this week.

Is that difficult to match up with?
Clay is a dynamic football player who makes impact plays. He has ability to switch plays mentally. For him to go in there and be as productive as he was, you have to give him a lot of credit for his instincts. I don't see the offense we go against, they'll have changes. It's what you go through every week in this league. You try to block accordingly.

The value of it is in the first opportunity. There's an adjustment that's made. How they declare their run blocking schemes. How they clear their pass protection schemes. Is he going to be cleared as a defensive lineman or linebacker. That's the benefit of an unscouted look. Week 2 will be different. It has benefits first time out of the box.

On using him inside, more productive than quad:

I wouldn't have called him a middle linebacker. I don't want to get that specific. He played different position in quad than last night.

On keeping Aaron Rodgers in the game:

We prepare to play four quarters. It's a good challenge to have. It stresses your football team out when you start taking players out of the game early. You start pulling three, four, five players on offense, defensive side of the ball. That's what you saw at the end. I don't have a thing on the call sheet that says when you want to pull everybody. You don't want to do it until fourth quarter, but that hasn't been the case.

There isn't a balance. You have 46 players. You start substituting players. Now you have guys who play 25, 30 plays a game and now they're going offense and defense. It's a great experience. How many times does your backup quarterback get to play in the regular season.

Aaron at the line of scrimmage, recognition and anticipation is at the highest level of his career. That particular play, I think the defense thought he was checking the protection adjustment and I think only two of the players got it.

Is Rodgers best weapon the brain?

Always is. You can't play quarterback without the ability to process, anticipate and recognize. Clearly, I think the strength of any quarterback is his mental gifts. He's definitely at the highest level. I won't compare Joe Montana to anybody. I'm not qualified to do that, frankly. Offense Aaron plays in today is different from offenses back then.

On McCarthy tripping over cord:

I don't remember the cord. I have a knee I'm battling and ran into Shawn Slocum. Probably didn't say the right words.

On his late challenge:

On success with screens:

We've actually called a lot of screens this year. You probably can't see it on the TV copy. Our screen game, from our self-scout, has been very productive.

Forget to tell Julius it was a 2-minute speech. That's why we were a little late for the game. It was one of the best we've ever had.