Over and over again, Packers receiver Jordy Nelson has come up with big – and usually long – plays in important moments 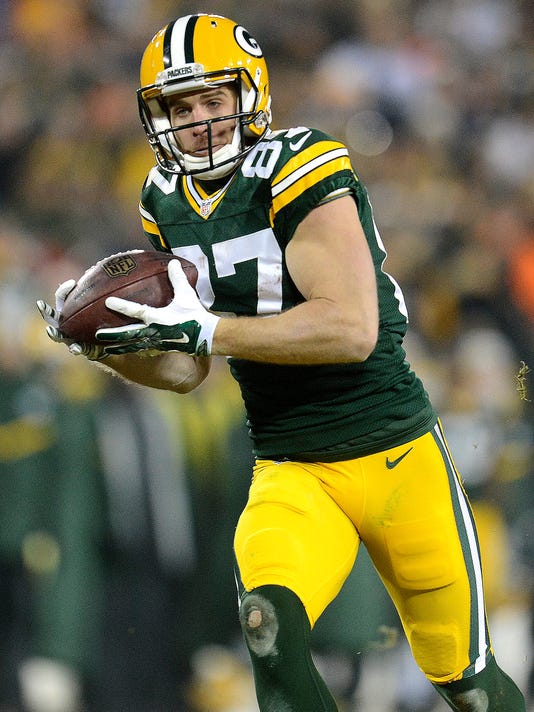 Jordy Nelson even surprises himself.

The Green Bay Packers receiver expected to have a good season, and he has. But seven touchdowns of more than 40 yards?

Considering no NFL receiver had ever done that – and Nelson passed Hall of Famers Jerry Rice, Bob Hayes and Elroy Hirsch to set the record, according to NFL.com analyst Gil Brandt – there was no way to anticipate Nelson's unprecedented success on deep routes.

"I think you can't go into a season thinking you'll get that," Nelson said. "Again, you just go out, do your job on that play. When you get the opportunity to make the play, you try to make it and make the most of it. We've been able to connect on a few of those this year, and sometimes they come in bunches for whatever reason."

The latest, long bomb from quarterback Aaron Rodgers to Nelson came Monday night. Nelson's 60-yard touchdown catch in the fourth quarter essentially broke the Atlanta Falcons' back. It came one week after Nelson beat New England Patriots cornerback Darrelle Revis for a 45-yard touchdown at the end of the first half. Over and over again, Nelson has come up with big – and usually long – plays in important moments.

It's odd to think Nelson has never been voted to the Pro Bowl in his career. Nelson is eighth in the fan vote for the Pro Bowl – first among NFC receivers – with 455,541 votes. The fan vote accounts for a third of the total Pro Bowl voting.

Nelson admitted earlier this season he's thought about the Pro Bowl. It would be a meaningful accomplishment, he said. He may be in line for even more individual awards. He's tied for the NFL lead with 12 touchdowns, fifth with 1,265 yards and tied for eighth with 78 receptions.

Those are the type of numbers that earn Nelson an All-Pro selection.

Nelson said he hasn't noticed significantly more attention from opposing defenses. Some weeks, coverage will roll over to his side of the field, trying to take away his deep routes. (Or keep two-high safeties, as Atlanta did last week.) Other weeks, there are still one-on-one opportunities on the perimeter.

No matter the coverage, Nelson's production has been the one constant. Even Monday, he burned Atlanta's two-high safeties with eight catches for 148 yards, two touchdowns and the 60-yard score. He's caught six touchdowns – including one in four of the last five games – since Green Bay returned from its bye week in early November. For defenses, that presents a scary thought.

Late in the season, Nelson may be getting even better.