Special teams will be 'stressed down the stretch'

Special teams will be 'stressed down the stretch' 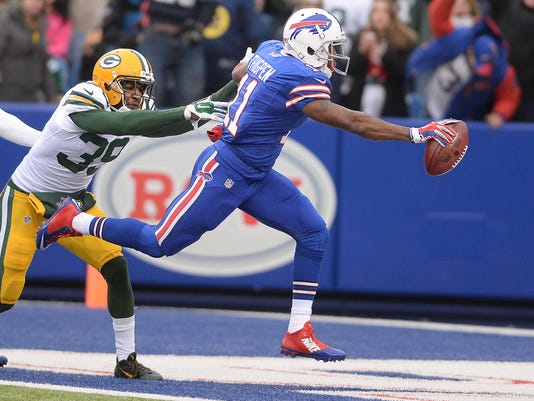 Sure, it was odd seeing Aaron Rodgers' throws consistently inaccurate. Rodgers started the game completing 1-of-6 passes, then 2-of-10, then 8-of-24. Eventually, he ended with the lowest completion percentage he's ever had as an NFL starting quarterback.

"I think the way the game started, frankly, I thought we were going to win the game decisively. That's what I felt on the sideline," McCarthy said. "I thought the punt return changed it."

McCarthy pointed to Green Bay's special teams – not the offense's shaky start – that changed momentum in Sunday's loss at the Buffalo Bills. Late in the first quarter, Bills punt returner Marcus Thigpen returned a punt 75 yards for a touchdown and 7-3 lead.

It stood as Buffalo's only touchdown of the game.

"Punt was a little short, and looks like we overran it," special teams coordinator Shawn Slocum said Monday. "We had three, four guys in position to make the play, and we didn't do it."

Slocum said punt coverage hadn't been an issue before Sunday. The numbers backed up him.

McCarthy made it clear special teams will be a primary focus moving forward.

He knows how opponent evaluations work. Each week, he spots the other team's weakness and plans to exploit it. When opponents evaluate the Packers, McCarthy said he knows they see special teams as an area that can be exploited.

"It's definitely a focus not only of ours, but it's a focus of our opponent," McCarthy said. "I think any time you get in these kinds of games, you get down to Week 15, your identity and your performance has been evaluated. Everybody feels you're strong in one area and not so strong in another, and how they're going to attack you. Our special teams are going to be stressed down the stretch and we need to not only combat that, but we need to go out and make plays ourselves."

McCarthy said wide-sweeping changes aren't necessary to correct the Packers' special teams. Rather, just "one or two" things need to be fixed. Kick and punt protection are likely the top priority.

One possibility could be inserting starting guards Josh Sitton and T.J. Lang in the middle of Green Bay's protection unit. Sitton and Lang began the season with roles on special teams, but they've been limited to offensive snaps since the bye week as they play through injuries.

"At this point, we've decided not to go that direction," Slocum said. "We'll look at that this week and decide what we're going to do from this point forward."

It's a "risk assessment" to consider whether Sitton and Lang should be used on special teams, McCarthy said. Of course, a weak special teams unit is also a risk.

McCarthy's concern with Green Bay's special teams was clear Monday. Coaches rarely single out one momentum-changing play over the course of the game. Often, they prefer to look at the entire body of work.

The frequent fiascos on special teams have simply become too much to overlook.

"This is our last week of padded practice, so we'll take advantage of that to make sure we work on the fundamentals and the things that we're doing there," McCarthy said. "The personnel is not right. We don't feel like we have that right yet as far as how we're utilizing some of the players and some of the matchups that the defensive or the field goal rush unit has been able to get on us."