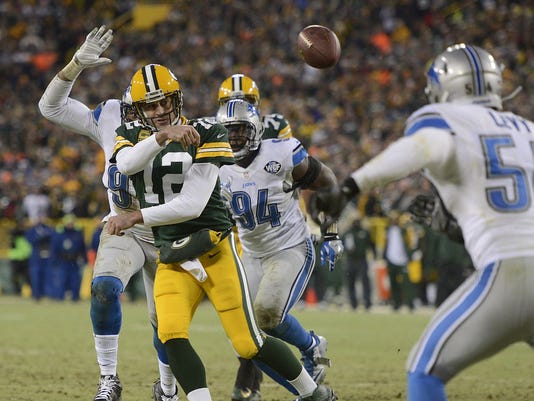 Tramon Williams didn't see the jersey at first. Only the pass.

"I didn't notice him out there until I saw one ball that kind of squeaked through and went in for a touchdown," Williams said. "I said, 'Oh, that's why it squeaked through. We've got No. 12 in the back.'"

The Packers quarterback practiced for the first time since aggravating his injured left calf muscle in the team's 30-20 win over the Detroit Lions on Dec. 28. Rodgers finished the game after initially heading to the locker room, but operated the offense mainly inside the pocket once he returned.

He wasn't visible during the portion of Thursday's padded practice open to the media, but coach Mike McCarthy said he took roughly "50-60 percent" of the snaps during the 11-on-11 team period.

Quarterbacks coach Alex Van Pelt added that Rodgers "looked like Aaron. Looked normal" during the workout, though it remains to be seen how much mobility he'll have with the calf during Sunday's divisional-round playoff game against Dallas.

"It wasn't really an issue. Didn't need to move around (Thursday)," Van Pelt said. "We tried to get him in a nice environment where he felt comfortable in the pocket, but like I said Sunday it will all come down to how he feels on game day. You know we have a plan in place, a good plan, and we have the ability to adjust at any time if we need to. I think a lot of that will be dictated by how he feels on Sunday."

There's one other positive in Van Pelt's mind. The injury didn't occur on the right side, Rodgers' plant foot. That's what allowed the quarterback to maintain his effectiveness from the pocket once he returned against the Lions, completing 11-of-13 passes for 129 yards and two touchdowns (one passing, one rushing).

Williams and T.J. Lang thought Rodgers looked good in practice, though the starting right guard admits he didn't see him move around a lot with Lang's back usually turned to the quarterback. Regardless, he doesn't see much changing against the Cowboys.

Like every week, the offensive line just needs to keep the pocket clean.

"The biggest thing for him is he likes to get outside the pocket once in a while and make some plays by extending the time there," Lang said. "Be interested to see if he'll be able to do that. But for us up front, our job is always to make sure we're taking care of him no matter if he's 60, 70, 80, 100 percent, it doesn't matter. We've got to do our job and take care of him. Him being limited mobility wise doesn't really change a whole lot for us up front."

The Packers added a pistol formation after he strained the calf the first time in Tampa Bay, so Rodgers doesn't have to push off the muscle in three- or four-step drop backs as often. It also gives him the option to hand the ball off.

Dallas has struggled to get consistent pressure with a four-man rush and ranks 28th in sacks this season, so it wouldn't surprise Lang to see the Cowboys deploy more rushers to keep the pressure on Rodgers.

The beauty of the situation from Van Pelt's perspective is Rodgers can beat defenses in a number of ways, including from the pocket if the situation calls for it.

"I've said that Aaron can play the game from all over the field in different spots," Van Pelt said. "He doesn't have to be outside the pocket to be a great player. He can be a great player in the pocket, too, and he showed that."