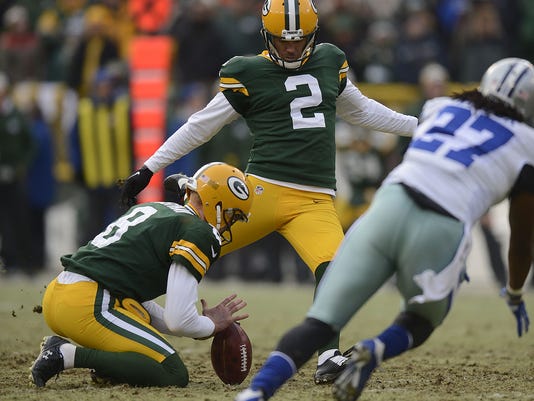 In a career that has had its highs and lows, a career that has seen the Packers at times bring in other kickers to compete with him, kicker Mason Crosby has not only persevered but also today stands as the team's all-time leading scorer.

A 30-yard field goal in the third quarter enabled Crosby to pass Ryan Longwell as the team's all-time leading scorer, regular season and playoffs, with 1,121 points.

"It's pretty awesome, even better coming with the win here in the division championship," said Crosby, who was also good from 40 yards. He finished with eight points on the day and now has 1,122 for his career.

"Obviously I've had some really good years, put a lot of points on the board and done some good things and this organization has paid me back with some of that through tough times sticking with me. I just try to work hard every day and make sure I go out and not take it for granted. Every time I have an opportunity to help this team win that's awesome, that's special.

"It's kind of surreal thinking about all the great kickers, the fact that I passed Ryan Longwell who had a great career. It's just cool to be here with the Green Bay Packers, who have been here forever and is such a storied organization. It's going to be fun someday to talk to my kids about."