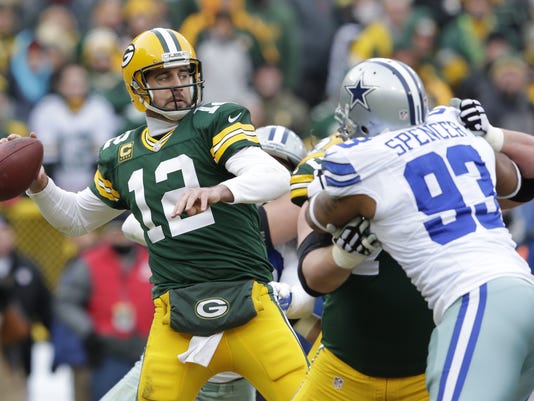 Packers coach Mike McCarthy spoke to the media on Wednesday afternoon. Here are some highlights:

Where Aaron is today, those are probably better questions for him. He's doing everything he can. We did a little more today than we did this time last week. We're dealing with it.

On Rodgers playing through the injury:

It's experience that he'll be able to draw from. I think our planning has gotten better through this process.

On noise level in Hutson:

We don't keep track of that. We did the wet ball drills. Try to simulate what we get Sunday.

It's experience. Both teams have that. It's beneficial.

On hungry players who don't have a Super Bowl title:

It's just as important. The new guys are just as important as the older guys. The ability to grow. It's the ninth year of our program. A majority of it being first- and second-year players.

On Flynn is running the offense:

When you're going through a week of preparation, you're trying to hit targets. When we practiced today, we practiced for attacking the Seahawks' defense, didn't practice who the quarterback was going to be.

I think the offensive line has been the most important component of our success. Five linemen playing cohesively is so important.

On midseason adjustments to defense:

The bye week we went through everything. I think had four, five topics that we looked at on defense. When Dom and I got together, we find three things I felt we needed to address. Dom and the defensive staff made it happen.

Defensively, they're playing extremely well. Offensively, there a little different. They are still running the ball well. Quarterback runs for first downs has been exceptional.

On all 53 players practicing:

Health is very important. You need all hands on deck. It's all a part of your preparation. We're taking all of our practice squad guys to Seattle.

On changes from past NFC championship games:

Didn't look at 2007 a whole lot. We practiced a lot different today than we did back then.

I don't know if there's a whole lot of people who want to tackle Eddie.

He's the impact we were looking for. I had a chance to be around him for two Pro Bowls. Just watching him be a part of our team from Day 1 to now have been night and day. He's been an outstanding leader for our team. He couldn't have more credibility. He's made a big impact for us.

He's very decisive with the football. He's a crafty runner. They utilize him a lot in the run game. We're looking at his running ability as that of a running back.