Carroll lobbies for Schneider as exec of the year

Carroll lobbies for Schneider as exec of the year 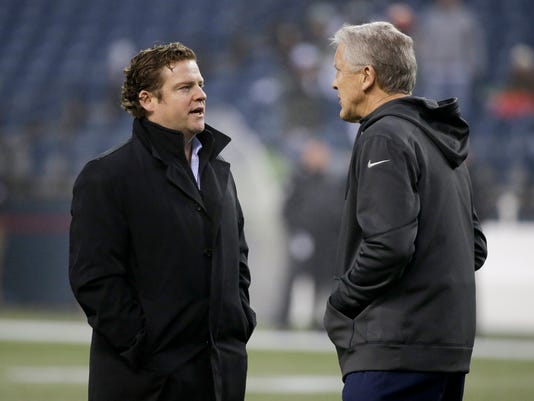 In his press conference Thursday, Carroll lauded Schneider's role in helping build the Seahawks into a team that won the Super Bowl last year and is playing for the NFC championship against the Packers this week.

Schneider, the De Pere Pennings graduate and high-ranking adviser for Packers general manager Ted Thompson from 2002-09, was Carroll's choice for Seahawks GM in 2010.

When asked whether the Seahawks feel under-recognized because they haven't won many individual awards despite their success the past two seasons, Carroll immediately talked of Schneider as deserving.

"I don't know how he couldn't be recognized with the drafts that he's had," Carroll said, "with the free agency success he's had, with the success of our lower draft picks that have come through."

Carroll named several of Schneider's most notable risks in the 2012 draft that have helped the team immensely: Russell Wilson in the third round despite the quarterback's short stature; linebacker Bruce Irvin, who was a risky first-round pick in because of off-field issues in college; and guard J.R. Sweezy, a seventh-round pick in 2012 who played defensive tackle in college but became a starter on the offensive line as a second-year pro last season.

"(Schneider's) insight and his ability and really the creativity that he brings couldn't have been more obvious," Carroll said. "But the rest of us, I don't know. We're just playing a game and we're a team. But I think his situation here really should stand out and should be recognized."