Drew Nowak's best chance of making it in the NFL might be at another new position, center 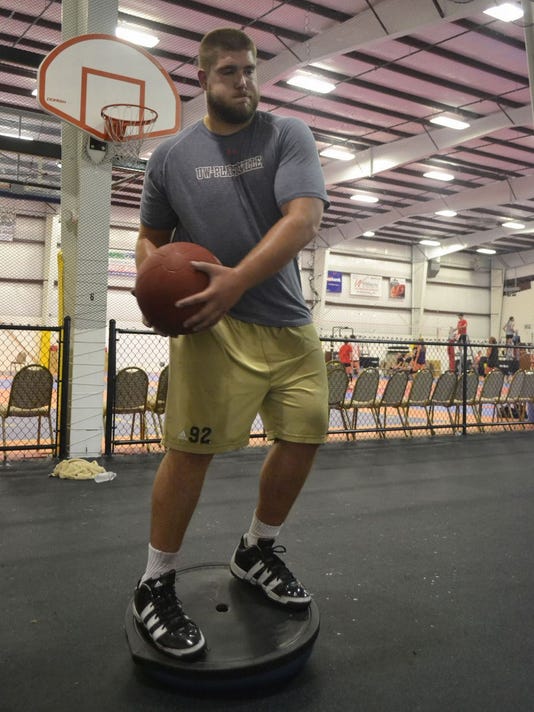 Drew Nowak keeps his balance while lifting a 15-pound medicine ball in an agility drill during a workout at House of Speed training facility in Ashwaubenon.(Photo: File/Gannett Wisconsin Media)

RENTON, Wash. – Drew Nowak's best chance of making it in the NFL might be at another new position, center.

The former De Pere High School standout switched from defensive line in college at Western Michigan to guard with the Jacksonville Jaguars in 2012 and '13. Then when the Seattle Seahawks signed him to their practice squad -- after Jacksonville released him at final cuts this year -- they moved him to center.

"I feel with my size I'd be better off at center," Nowak said. "I know I'm pretty smart, I can pick things up, I'm pretty athletic. I know if I get more reps at it I'll continue to get better. That's my best opportunity."

Nowak (6-3, 300) spent the 2012 season on injured reserve with Jacksonville because of a foot injury, then spent most of 2012 on the Jaguars' practice squad before being promoted to the 53-man roster in December.

He spent all of last offseason in the Jaguars' workout program, but they cut him at the end of camp. The Seahawks signed him to their practice squad before the first game.

Coincidentally, Nowak last summer sat at the Lee Remmel Sports Award Banquet sat at the same table as John Schneider, who grew up in De Pere and is the Seahawks' general manager. Nowak received the professional service award, and Schneider the distinguished service award.

As a member of the practice squad, Nowak is not under contract for next season but is hoping to re-sign with the Seahawks and take part in all their offseason work. In practice he's been working primarily as the backup center for the scout team as the Seahawks prepare this week to play the Packers in the NFC championship.

"I think it's pretty awesome," he said. "It's just a great opportunity for our team. It's kind of surreal, because it's kind of another game. Every game is a championship opportunity, and we go out there and play it like it's the next game. I feel like the sky's the limit for us." ​