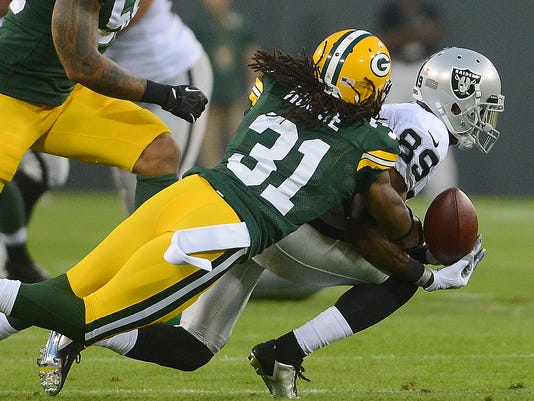 The Jacksonville Jaguars coach knows it all too well after watching the rebuilding franchise make more than 400 transactions over the last three years. The Jaguars spent heavily this offseason in hopes of finding stability and purposely sought out younger players who they felt had their best years ahead of them.

Enter Davon House, the former Green Bay Packers cornerback who agreed to a four-year $24.75 million contract with $10 million guaranteed earlier this month. He's has made only 14 starts in four seasons, but the 6-foot, 195-pounder has flashed potential when opportunity is presented.

The free-agent frenzy often has consequences and Bradley admits there are no sure things. He's wary of calling House a starter even if his contract suggests he is. There is familiarity, though. House's former college coach, DeWayne Walker, now is the Jaguars' defensive backs coach.

"He was unique in that our DB coach DeWayne Walker coached him in college. He had him at New Mexico State," Bradley said. "From where Coach Walker saw him to where he's at now, we saw great maturity. But he's not there yet. So here he is going into the prime of his career and he still has great upside. That's what we really liked about him."

The Cleveland Browns feel similarly about Tramon Williams, who spent eight seasons in Green Bay before signing a three-year, $21 million contract last week. The Browns have an all-pro cornerback in Joe Haden, but were looking to add another veteran after Buster Skrine signed with the New York Jets.

Browns coach Mike Pettine likes the flexibility Williams provides with his ability to play either inside or outside. That could come in handy depending on the maturation of 2014 first-round pick Justin Gilbert, who largely was inconsistent as a rookie.

Williams said during an appearance on Sirius NFL radio Tuesday that he felt it was the right time to move on after the Packers didn't show much interest once free agency began. However, the skyrocketing price for cornerbacks could have scared general manager Ted Thompson away.

Regardless, Pettine believes Cleveland is a good fit for Williams, who turned 32 last week.

"It's no secret our system is predicated on having guys that can lock up and play man coverage on the outside," Pettine said. "This is something that Tramon's demonstrated he can do at a high level for a long period of time, and I've always said you can't have enough corners."

Like cornerback, the Packers have some work to do at inside linebacker after releasing veterans A.J. Hawk and Brad Jones last month. Hawk landed in Cincinnati on a two-year, $3.25 million deal with $500,000 guaranteed.

"A.J. helps us right away with his ability to come in and be a productive player," Lewis said. "He's been on a very good team. He's been a smart guy, an integral part of that and we're excited to have him that way. He'll come into our linebacker room and compete with our guys."

Two weeks into free agency, Ted Thompson remains the only general manager who hasn't signed a player off another team. As Bradley cautions, success on the field isn't always dictated on who poaches the most players in March.

As young players develop, he hopes to follow the Packers' draft-and-develop philosophy.

"If you ask any general manager in here, they'd like to build their whole team through the draft," Bradley said. "But with free agency, there's guys who have come in and been very productive. The challenge, I think, in free agency is some of these guys I didn't meet. I didn't have a chance. They didn't come into our facility.

"It's hard with free agency. You hope that you're bringing in not only the right talent but the right mindset into your locker room."