The New Hampshire wide receiver, who visited with the Packers this week, hopes to catch on in the NFL. 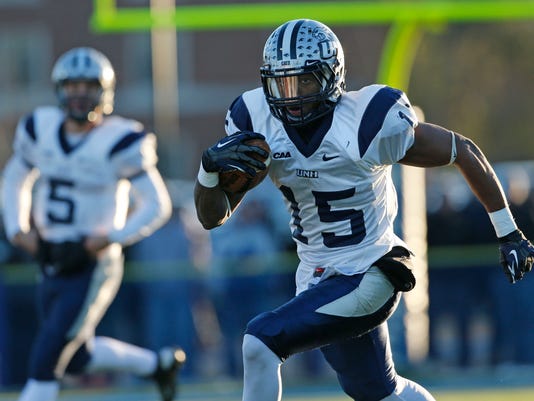 R.J. Harris is used to playing this role by now, flying under the peripheral of most coaches and scouts.

The 6-foot, 201-pound receiver is fine with that. He has been since quietly shattering the record books at Arundel (Md.) High School, breaking five school and two state records – 28 touchdowns in a season and 20 catches in a game during the opening round of the playoffs.

When it came time for college, the recruiting process was trying. It wasn't until midway through his senior year the first offer came in. Most of the interest came from schools in the Football Championship Subdivision, and more specifically, the Colonial Athletic Association.

Eventually, Harris made the eight-hour trip from Odenton, Md., to the University of New Hampshire in Durham where he became a focal point of the offense. After back-to-back 1,000-yard campaigns, Harris broke out as a senior with a FCS-leading 1,551 receiving yards and 15 touchdowns on 100 receptions.

Now, he's back where he started. Seen by most pundits as a potential late-round draft pick or priority free agent, Harris must prove himself all over again leading up to the NFL draft at the end of the month.

Harris has generated a good deal of interest. He made his first pre-draft visit on Monday with Green Bay Packers and has another lined up in Washington on Thursday.

"That's what I pride myself on. I've always flown under the radar," Harris said. "That's just me. I don't know what it is, but I've always been overlooked. That's what happened in college and I went out and had a really successful four years at New Hampshire. I think I did pretty well. Now flying under the radar again, it's just more motivation for me to go out and work hard and prove to people that just because you don't look at me doesn't mean I'm going to give up on my dream."

Harris was raised in a military family. He was born on an Army base in Wurzburg, Germany, but his family moved back to the States shortly after his arrival.

He considers Maryland home. That's where the passion for football developed for him and his younger brother, Romeo, who's a receiver at Monmouth University in New Jersey. The game wasn't Harris' first love, though. For most of his childhood, he was a year-round basketball player traveling the AAU circuit.

Harris picked up football in middle school. As a freshman, he made an unsuccessful bid at winning the JV quarterback job before the coaching staff reassigned him to receiver.

Speed was always seen as Harris' limitation. Despite his impressive high-school credentials, many coaches were unsure if his skill set would translate to the college game. Harris knew he what he could do on a football field. It just wasn't reflected in a 40-yard dash.

So Harris finally did something about it. He began training with Matt Gates at Fit Speed Athletic Performance in Weston, Fla., and began to notice a difference. At his UNH Pro Day last month, he was clocked at 4.49 and 4.53 in the 40.

"Yeah, really a late bloomer. That just came on," said Harris of his speed. "I would say last summer was when I started to find myself with the speed. I've always had the speed. Like I can play fast, but running 40s was something I was never good at.

"It worked out for me and put me in a good situation for the next level."

Chip Kelly's impact on the New Hampshire football program can still be felt nearly a decade after his departure to Oregon. The Wildcats still run a spread offense based around his no-huddle principles.

New Hampshire enjoyed a successful season during Harris' senior year, advancing to the FCS semifinals before falling to Illinois State 21-18. The Wildcats' only other loss came in the opener to Toledo. Predictably, they had a record 12 players (including Harris) take part in their pro day last month.

Kelly, a UNH alumnus who coached at the school for 14 nonconsecutive years, conducted a private workout with Harris last weekend before his visit with the Packers.

"I know I have the ability to make a contribution at the next level, somewhere for some team at some position," Harris said. "It might be at receiver. It might be on special teams or whatever, I'm willing to do whatever it takes to be in a position and have an opportunity to make an impact."

Harris has received a lot of advice from those affiliated with New Hampshire about what it takes to make it at the next level. His position coach, Ricky Santos, played quarterback for a few years in the CFL.

He's reached out to other UNH alumni, including receiver Dave Ball, linebacker Matt Evans, and defensive backs Corey Graham and Dino Vasso. Perhaps his best resource has been Baltimore Ravens receiver Alec Lemon, his former high-school teammate who broke into the league as an undrafted free agent two years ago.

Harris estimates he's called Lemon "every other day" since the process began.

Whatever happens, Harris is trying to live in the moment and take everything in. He won't be one of the 32 players drafted in the first round, but "there's other guys who would die to be" in Harris' position. In a couple weeks, he'll get an idea of what his future in football holds.

"It always comes back to the same thing. It's an once-in-a-lifetime opportunity," Harris said of Green Bay. "I've never been up to Green Bay. Growing up, I never thought I'd ever get an opportunity to go to Green Bay. I see the Packers on TV. I get phone call saying, 'We want you to come on a visit.' It just really set me back like this is unbelievable.

"It was a great experience. I got to see the facilities. I got to meet the people in the front offices and things like that. I ran into a couple of the players, as well. It was just a great all-around experience. I really enjoyed my time there."