Behind Perryman, 10 other potential Packers picks

Here are a few other prospects for Packers fans to keep an eye on tonight in the first round of the NFL draft.

Behind Perryman, 10 other potential Packers picks 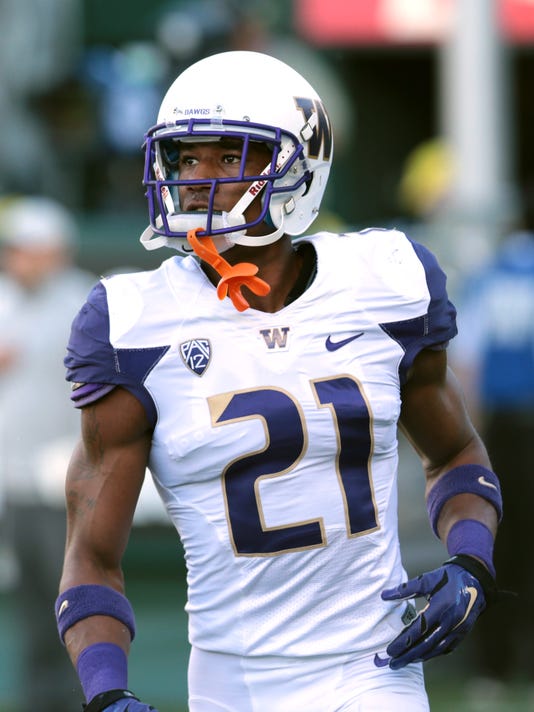 When it comes to the crux of what the NFL draft is about – finding the perfect balance between value and need – it's an odd year for the Green Bay Packers.

Some of the Packers' most solid positions on the depth chart – running back, wide receiver – are the richest classes in this draft. Where the Packers need the most help – inside linebacker, tight end – represents some of the draft's weaker points.

Perhaps the best marriage of value and need could be found at cornerback. As many as six – but probably fewer – could go in the first round tonight. If a cornerback back of general manager Ted Thompson's liking falls to No. 30, it's plausible the Packers could go that route.

While high on the Packers' to-do list this weekend, adding a cornerback only does so much for a defense that was among the league's worst against the run at times last season.

There is no clear, obvious option when the Packers are scheduled to be on the clock late in tonight's first round. A trade out of the first round will probably be the best option, if a trade partner is available. Already today, the rumblings have begun that the New Orleans Saints and Jacksonville Jaguars are looking to trade into the end of the first round, according to multiple reports. Other teams could become candidates as the day gets older.

Short of a trade tonight, the Packers' best option would be drafting Miami senior inside linebacker Denzel Perryman.

Perryman is the most instinctive and fiercest run defender among the top-tier inside linebacker prospects, and the best tackler. He would allow the Packers to move Clay Matthews back to outside linebacker, upgrading the pass and run defense with one pick.

Perryman would be a reach at No. 30, and he would be available if the Packers were able to trade back into the early second round. It's unrealistic to expect Perryman to fall to the Packers' scheduled second-round pick at No. 62, which is why Perryman could sneak into the first round.

Here are a few other prospects for Packers fans to keep an eye on tonight. There's reason to believe Thompson would have interest in any of them.

Unlikely to fall to No. 30, but Brown has great athleticism and the explosive burst needed to be an interior pass rusher. He has the size to play nose or three-technique in a 3-4, and the athleticism to occasionally line up as a five-technique. Measured 6-foot-2 3/8 and weighed 319 pounds at the NFL combine with 32.5-inch arms and a 78.5-inch wingspan. Ran a 5.05 40. Ranked fourth among Big 12 defensive linemen with 6.5 sacks and third with 15 tackles for loss in 2014. Ability to pressure quarterback makes him a rare, three-down nose tackle.

Troubled off the field but undeniably talented on it. Peters was dismissed from Washington's football program last November after multiple run-ins with a new coaching staff, which may drop him to the late first round. Has the talent to be a top-15 pick if he were clean off the field. Good size, Peters measured 5-feet-11 1/2 and weighed 197 pounds at the NFL combine. Smaller hands (8 3/8 inches), but adequate arm length (31 1/2 inches) and long wingspan (79 inches). Ran a 4.53 combine 40. Can play too physical at times, but has the skills to be the best cover corner in the draft. Tied for third in the Pac-12 with 3 interceptions despite only playing 9 games in 2014.

Goldman could be an option as a big, two-gap nose tackle who could immediately upgrade the Packers' run defense. Hulking at 6-foot-3 7/8, 336 pounds. Average hand size (10 1/8 inch), arm length (33 1/8 inch) and wingspan (79 5/8 inch). Less athletic than Brown, Goldman ran a subpar 5.28 40 at his pro day. Goldman is not seen as a pass rusher on the next level, which could limit his third-down snaps. Started his career at defensive end before moving to defensive tackle last season. Won a national championship in 2013. Record 35 tackles, 8 tackles for loss and 4 sacks in 2014.

Kendricks comes with impeccable bloodlines. He's the younger brother of Philadelphia Eagles linebacker Mychal Kendricks, a second-round draft pick three years ago, and already a 40-game starter in his short career. Eric Kendricks is instinctive and athletic. Ran an average 4.61 combine 40. Undersized at 6-foot 1/4 inch, 232 pounds. Average hand size (9 5/8 inches), small arms (31 inches) and average wingspan (76 inches). Has drawn concerns that he's too light to be productive against the run. Strength is his pass defense. Best cover linebacker in the draft. Won the 2014 Butkus Award as college football's top linebacker. Ranked second in Pac-12 with 149 tackles, eighth among LBs with 11.5 tackles for loss, and tied for second among LBs with 3 interceptions.

A physical freak who blew up the NFL combine in February. Had a world record broad jump of 12-feet, 3-inches as well as a 44.5-inch vertical jump. Good size for the position, measuring 6-foot 1/2 inch, weighing 199 pounds. Big hands (10 inches), long arms (32 inches) and terrific wing span (76.5 inches). Ran a 4.43 40 at his pro day. May not be a more physically gifted cornerback in the draft. There is concern Jones is more of an athletic tester than a complete football player. Often failed to play up to his physical gifts last season. Shoulder injury may have contributed to disappointing tape. Had a better season in 2013 than 2014. Two interceptions and four passes defended last season.

Bit of a tweener who projects better as a safety than cornerback. Starting safety for three years before moving to corner last season. Good size, measuring 6-foot 3/4 inch and weighing 205 pounds. Adequate hand size (9.5 inch), average arm length (31.5 inches) and long wingspan (78 1/8 inches). Ran a 4.45 combine 40. Versatility to play multiple positions in the secondary. Only one interception last season, but tied for second in Pac-12 with 13 pass breakups.

Elite size for the position. Measured 6-foot-4 1/8 and weighed 246 pounds at NFL combine. Average hand size (9 inches), but long arms (33 inches) and great wing span (80 1/8 inches). Ran a 4.66 combine 40. Broad jumped 10-foot, 1-inch with a 40.5-inch vertical. Former high school quarterback, McKinney started his college career at outside linebacker before moving inside. Must develop more with play diagnosis. While size is great for run defense, McKinney struggles to move in space and cover against the pass. Recorded 71 tackles, 8 tackles for loss and 3 sacks last season.

Physically gifted athlete. Size and speed to play Elephant rusher. Measured 6-foot-3 1/2 inches and measured 267 pounds. Ran blistering 4.62 combine 40, second best among defensive linemen. Big hands (11 inches), average arm length (33 3/4 inches), and good wingspan (81 1/4 inches). Must develop better arsenal of pass-rushing moves. Too often rushes through the middle of a lineman instead of the edge of a blocker's pads. While he has all the physical tools, Odighizuwa is behind former UCLA defensive end prospect Datone Jones as a pass rusher. Missed all of 2013 with two hip surgeries but rebounded well in 2014. Ranked ninth among Pac-12 defensive linemen with 11.5 tackles for loss and eighth with six sacks last season.