The Packers worked on two-minute drill after heavy showers moved into the area. 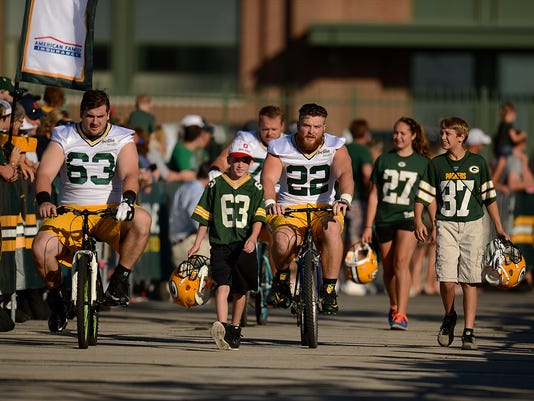 The Green Bay Packers spent all 1 hour, 24 minutes of Monday's padded practice outside on Nitschke Field despite a steady downpour during the final two-minute period.

Without any lightning in the area, the Packers had the opportunity to run their first-team offense against the defense in the rain. The wet conditions challenge players with their footing, and receivers and running backs with ball security.

Right tackle Bryan Bulaga liked the passing shower. It cooled down what had been a smoldering practice and gave the offensive line a chance to work on their footwork.

The biggest benefit of staying outside instead of moving into the sanctuary of the Hutson Center is it gave quarterback Aaron Rodgers and center Corey Linsley a chance to work on their exchanges in midst of the pressure-packed period.

"I think it actually has some benefits to it, especially for Corey and Aaron handling the ball in the rain and the elements," Bulaga said. "Receivers catching the ball – especially in a fast-tempo 2-minute situation, because they don't have time to get their gloves dry or anything like that. I think it's beneficial."

Linsley didn't take an in-game rep with Rodgers until the Packers' regular-season opener in Seattle last year. He wound up playing all 1,050 offensive snaps and snapped 33 more balls to Rodgers in Thursday night's preseason opener against New England.

Still, Linsley willingly takes every rep he can get. The more challenging the conditions, the better.

"The two-minute is pretty much the highest stakes you can get in football," Linsley said. "On top of that it was raining, so it was awesome to have that opportunity to grow as an offense."