It's been a decade since the Packers last held a joint practice, hosting the Buffalo Bills in 2005. 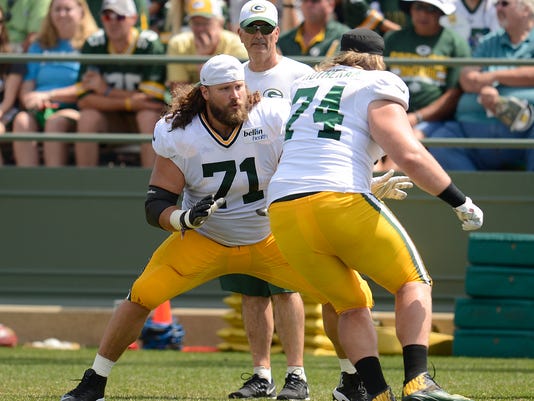 Fighting has regularly mixed with football this preseason. Cam Newton vs. Josh Norman. Geno Smith vs. IK Enemkpali. The Washington Redskins vs. the Houston Texans. Each day, it seems, there's another training camp blowup somewhere in the NFL.

Sitton gets it. Sometimes, he said, the natural tension of competitive practices in the August heat boil into extracurricular violence. What Sitton said he doesn't understand is how teams can continue scheduling joint practices – two teams competing against each other – when they seem to never end well.

"I'm not a big fan of those," Sitton said. "It's kind of stupid. It's just inviting fighting. It happens every single time, it doesn't matter. I'm not a fan."

It's been a decade since the Packers last held a joint practice, hosting the Buffalo Bills across the street from Lambeau Field in 2005. Coach Mike McCarthy was hired a year later.

In the past nine years, McCarthy said, he's considered scheduling a joint practice. He also admits he may be the only Packers employ – from general manager Ted Thompson down to the players – who would be open to it.

"Really, our situation is unique," McCarthy said, "in the fact we would never take the team out of Green Bay. So that's one factor. There's a team in the past that was interested and wanted to get into one time in Green Bay and one time somewhere else, and that wasn't going to work."

After the collective bargaining agreement that passed in 2011 limited the number of preseason practices, McCarthy said it would be difficult to schedule jointly with another team.

The Packers open training camp each year with eight installation practices, introducing their offensive and defensive schemes to players. From there, they transition to an "in-season practice" format.

Still, McCarthy sees benefit of joint practices. When he was the Kansas City Chiefs' quarterbacks coach in the 1990s, his team practiced against the Minnesota Vikings and New Orleans Saints. McCarthy remembers those practices being successful, mostly because the opposing head coaches had good relationships.

"I think a lot has to do with the structure and the expectations and controlling it and so forth," McCarthy. "I can remember practicing in La Crosse, and (Saints) coach Jim Mora ripping into our players if they jumped outside the lines. Then you had Marty (Schottenheimer) on the other field, and I'm sure he was doing the same. So we really never had any issues."

Thompson remembers practicing against the Denver Broncos when he was a linebacker with the Houston Oilers. Unnecessary violence was a common theme, even back then.

One year, Thompson said, an Oilers safety "clobberknocked" a Broncos receiver during seven-on-seven drills, which are supposed to be noncontact. Broncos coach Dan Reeves threatened to pull his team off the field, but Glanville promised to "straighten out" his safety.

Instead, Glanville got into the defensive huddle and told the safety "that's good hitting."

"So you have people speaking out of both sides of their mouth," Thompson said, adding he doesn't think the Packers would schedule a joint practice. "There's a competitiveness that, these are grown men that have been competing all their lives. You put them in a situation where it doesn't take much to get that out of whack.

"So we've seen it happen. It happens. I don't think there's any ill feelings one club towards another, but we'd rather it not happen. The risk of injury, somebody whacking their hand or something like that."

With several factors often building to an inevitable outburst, it's almost more surprising when a team gets through training camp without fighting. So far, the Packers are on course.

Sitton said the Packers' veteran leadership is why there hasn't been a fight to this point in training camp. Of course, there's no guarantee it won't happen. All it takes is one slip for a brawl to spark.

"We've kind of learned that fighting makes you tired," Sitton said. "You try and avoid it, but when it comes down to it, you defend your guys. Right now, it's offense versus defense. It's training camp. That's how it goes. You defend your guys."