Undrafted players to watch against Steelers

Undrafted players to watch against Steelers

Today's trip to Pittsburgh kicks off a stretch of three preseason games in 12 days for the Green Bay Packers. Once it's over, general manager Ted Thompson and his staff will have to make a final determination on what form the team's initial 53-man roster will take.

The Packers have had at least one college free agent make the roster since Thompson was hired in 2005. That total gradually has increased in recent years with 12 undrafted rookies landing on the 53 over the last four years.

Who makes the cut? You be the GM with our Roster Builder

Miami cornerback LaDarius Gunter looks like a strong candidate to continue that trend for an 11th consecutive season, but a handful of other unsung players also have distinguished themselves during the early portion of training camp.

The stakes are high. How the players perform over the next two weeks ultimately will decide whether or not they're on the roster when the Packers travel to Chicago on Sept. 13 for their regular-season opener.

With that in mind, here are a few undrafted rookies and first-year players to keep an eye on against the Steelers and the remainder of the preseason.

In two weeks, he hopes it's enough to earn him a roster spot behind the Packers' one-two backfield combination.

Harris was a bell cow during his four years in Lafayette, racking up 3,330 yards and 44 touchdowns over his four years. When his steady career wasn't enough to get him drafted, Harris signed with the Packers for a $3,500 bonus.

Harris is still taking snaps behind practice-squad holdover Rajion Neal, but he shined during his 20 snaps against the Patriots. He had seven carries for 41 yards, including a 25-yard touchdown (thanks in part to rookie receiver Ty Montgomery knocking down three would-be tacklers).

Everyone expected former North Dakota State running back John Crockett to be this camp's Cinderella, but Harris' strong start came as no surprise to Packers defensive lineman Christian Ringo. He chased down Harris in practice for four years at Lafayette and knew he had what it took to succeed at the next level.

"It's just an honor to just see him carrying the ball," Ringo said. "It's the same situation. Just different colors. It's a great feeling to have somebody on that side that I know personally and know like a brother. Love him like a brother."

Crockett was activated two weeks again from the physically unable to perform list, so third-string running back snaps are now being sliced three ways. It's possible the Packers could take with only two natural running backs into the regular season, but Packers coach Mike McCarthy reiterated the importance of having a third-string back this past week.

The Packers haven't had an undrafted rookie running back make the initial 53-man roster since Kregg Lumpkin in 2008. Harris will need more performances like he had in New England to convince the Packers to break the skid.

"He did some good things and obviously he's got some things to grow off of," running backs coach Sam Gash said. "Just him increasing his play speed and stuff, we'll see. He's still a rookie so we'll have to wait and see." 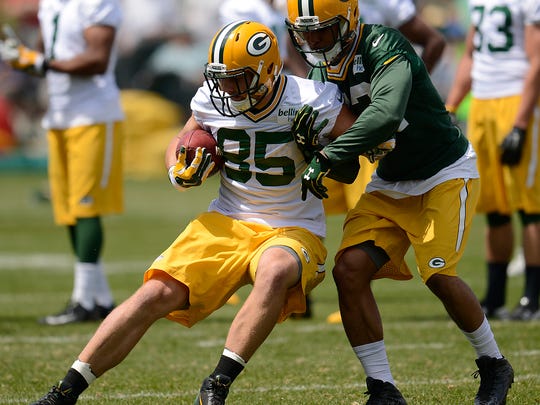 The 6-foot-4, 252-pound tight end made coaches and team personnel take notice with a few acrobatic catches right off the bat during the offseason program.

However, a significant hurdle was thrown in the way of his roster bid when he broke the middle finger on his left hand on a pass from backup quarterback Scott Tolzien during the first week of camp. He was able to return after missing only one practice, but has been forced to wear a club ever since.

Henry, 22, caught 78 passes for 1,094 yards and 12 touchdowns for the Hilltoppers. He carried over that pass-catching ability early in camp before the setback. Affectionately known as "The Noodler" for his penchant for catfishing, Henry personifies the build the Packers look for in their tight ends.

"It's definitely been the most difficult thing I've probably ever had to do," said Henry, who took a pre-draft visit in Green Bay and signed for a $5,000 bonus shortly after the draft.

"It's definitely a challenge getting used to it, but overall I've adapted well with it. It's challenging blocking, but you just have to get movement. You can't really grab a hold of anything. Catching, a lot of body catches and you're trying to position yourself."

The good news for Henry is nobody is running away with the No. 3 job behind Richard Rodgers and Andrew Quarless. Plus, if Quarless is suspended at all following his July 4 arrest in Miami Beach, the Packers will need one, maybe extra two tight ends, to survive part of September.

Justin Perillo, an undrafted success story from 2014, added about 10 pounds this offseason and is deceptively quick for his size. He made two impressive catches during the Packers' preseason opener in New England, but was held out of practice all week after sustaining a concussion in the third quarter.

The Packers liked UAB's Kennard Backman enough to use one of their three sixth-round picks on him. His 6-foot-3, 245-pound frame screams of raw athleticism, but consistency has been an issue. He's had quiet stretches and struggled with drops at times. On Thursday, however, he caught a nice pass deep in the seam from rookie quarterback Brett Hundley.

Henry hopes to get the club off soon. Meanwhile, he's trying to keep pace with his fellow rookies. His blocking and pass-catching ability are limited, but he's been able to work on other areas like route-running.

"It's a big obstacle to overcome," tight ends coach Jerry Fontenot said. "Whenever he was finally able to come back out to practice, we said let's focus on the things that we can get better at. I think certainly in the run game and route-running, we can get better at. I don't know that we're going to get any better catching the ball at this point, but we can certainly work on those fundamentals still as far as eye control and things of that nature." 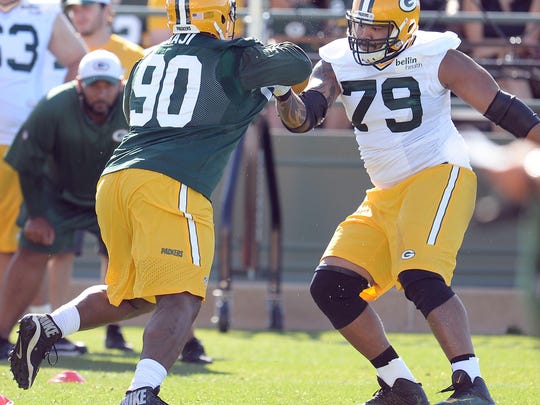 It had been six years since the last time Josh Walker played left tackle at Rhea County High School in Evansville, Tenn.

Still, that didn't stop the Indianapolis Colts from deploying the 6-foot-5, 328-pound offensive lineman there in last year's preseason opener against the New York Jets without taking a single snap at left tackle in practice.

Needless to say, things didn't work out with the Colts. Their loss turned out to be the Packers' gain. Green Bay signed Walker to its practice squad in Week 3 and held onto him the rest of the season. Walker was unrefined, but showed a lot of athleticism for a man his size.

The Packers let him work most of last season at guard, his natural position, while slowly teaching him tackle. When the season was over, offensive line coach James Campen gave him a homework assignment to work on his footwork at tackle.

His was astounded by what he saw when Walker returned for the start of the offseason program.

"The things he's done a great job of is he stayed this offseason and his body composition is so much better than when he first came here," Campen said. "He looks better. He's lighter, playing with more confidence. The more reps he gets in games, the better he's going to be. Expect him to get better and better."

Walker, 24, spent his year on the practice squad watching veterans Josh Sitton, T.J. Lang and Bryan Bulaga, three linemen he considers among the best in the game. He took something from each, but also wanted to use the redshirt year to hone his own strengths and fundamentals.

He impressed right out of the gate this summer with a 18-2 record in one-on-one drills that ranks among the best on the offensive line. Walker has worked mainly at right guard with the second-team offensive line, but he's also had the opportunity to show the strides he's made at tackle.

Walker rotated in at right tackle late against the Patriots and has taken snaps on the left side with the third-team offensive line with David Bakhtiari sitting out of practice this week with a knee injury.

"It's definitely different," Walker said. "It's good to take chunks and focusing on one thing as opposed to going guard one day, tackle the next, which is fine. But it's cool to be able to focus in and tell me this week we're going tackle. This week we're going guard. It's nice. Plus, I've been keeping primarily on the right side for the most part. I could definitely bump left if need be. I think they're managing it really well."

The Packers have four reserves in Don Barclay, JC Tretter, Lane Taylor and Garth Gerhart who have each spent at least one season on the Packers' roster. However, Barclay is the only proven option at tackle and he's coming off reconstructive knee surgery that sidelined him for the entire 2014 season.

Walker understands versatility is his ticket onto the roster. With Bakhtiari unlikely to play against the Steelers, he should have ample opportunity to show he can fill a utility role.

"Last year, I'd play a little practice-squad tackle and I wasn't really effective at it," Walker said. "In the offseason, I trained really hard on my footwork. Little stuff like that and now I can play tackle. I can do it. That's my biggest thing is I can play tackle now. I think they're comfortable with putting me out there."