The Green Bay Packers took a couple of big hits in the first half Sunday night. 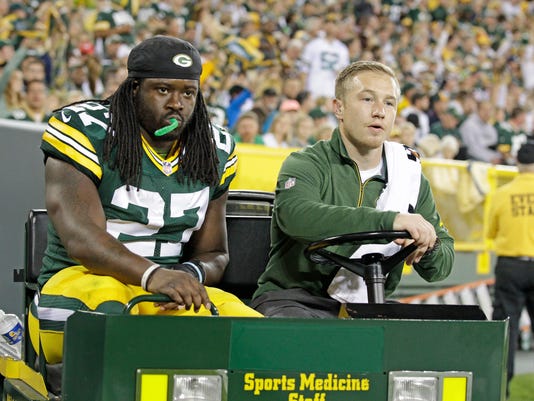 Green Bay Packers running back Eddie Lacy (27) is carted off the field after being injured against the Seattle Seahawks.(Photo: Wm. Glasheen/P-C Media/@WmGlasheen)

The Green Bay Packers took a couple of big hits in the first half of Sunday night’s 27-17 victory over the Seattle Seahawks, losing two offensive playmakers to ankle injuries.

Running back Eddie Lacy left the game in the first quarter and never returned, while wide receiver Davante Adams departed early in the second quarter. Adams was back on the field at the start of the second half with his left ankle heavily taped.

Lacy played only in Green Bay’s first possession of the game, a 10-play, 80-yard scoring drive that ended with Aaron Rodgers hitting James Jones on a 29-yard touchdown pass. Lacy carried the ball three times for 9 yards on the drive.

James Starks took over and finished the game with 20 carries for 95 yards and four receptions for 11 yards. Starks’ only blemish on the night was his fumble on a short reception that was recovered by Seattle linebacker K.J. Wright early in the second quarter.

Adams, who caught four passes for 27 yards before his injury, came up limping on his left ankle after catching a 13-yard pass on third-and-6 to give Green Bay a first down with 10 minutes, 34 seconds left in the first half.

Just a couple of plays after Adams was knocked out of the game, Packers defensive lineman Josh Boyd left the field on a cart. He also sustained an ankle injury and didn’t return.

Packers coach Mike McCarthy said after the game that he didn’t have any further report on any of the injuries.

The Packers entered the game without starting right tackle Bryan Bulaga, who reportedly had surgery to repair a torn meniscus and also sprained his MCL during individual drills at Thursday's practice.

After Adams was injured, he was replaced in the lineup by rookie Ty Montgomery.

The third-round draft pick out of Stanford finished with 37 yards on four catches, three coming during Green Bay’s go-ahead touchdown drive early in the fourth quarter.

Near the end of the first half, Montgomery was the benefactor in a key pass-interference penalty on Seattle cornerback Richard Sherman.

Facing second-and-17 on the Packers’ 13-yard line, Rodgers drew the Seahawks offsides and had a free play. He threw it deep to Montgomery, who was interfered with by Sherman on the Seattle 35 with 42 seconds left in the first half. That penalty led to an 18-yard Mason Crosby field goal and a 13-3 halftime lead.

Montgomery, who lined up in the slot and occasionally out of the backfield, also showed a penchant for downfield blocking, twice helping teammates push for extra yardage on the go-ahead touchdown drive.

Insider: Thumbs up to run defense

One week after getting rolled over for 189 total rushing yards by the Chicago Bears, including 141 from Matt Forte, the Packers’ defense held Seahawks running back Marshawn Lynch to 41 yards on 15 carries.

Seven times, Lynch was held to no gain or negative yardage. Defensive linemen Mike Pennel and B.J. Raji, and linebacker Clay Matthews all were involved in two of those plays in the first half.

This after the All-Pro shredded the Packers for 157 yards and a touchdown on 25 carries in last season’s NFC championship game.

Green Bay Packers running back James Starks (44) looks for a hole in the fourth quarter against the Seattle Seahawks. Kyle Bursaw/P-G Media/@kbursaw
Fullscreen

Packers fans react to a call by the referees in the second half against the Seahawks. Kyle Bursaw/P-G Media/@kbursaw
Fullscreen

Green Bay Packers running back Eddie Lacy (27) looks for a hole in the first quarter against the Seattle Seahawks. Kyle Bursaw/P-G Media/@kbursaw
Fullscreen 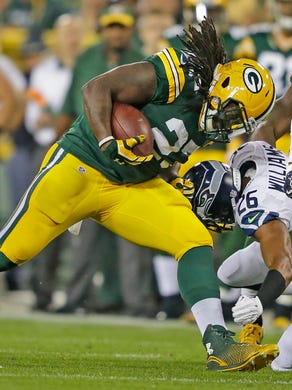 Seattle Seahawks wide receiver Doug Baldwin (89) hauls in a touchdown pass to give the Seattle Seahawks the lead in the third quarter. Kyle Bursaw/P-G Media/@kbursaw
Fullscreen 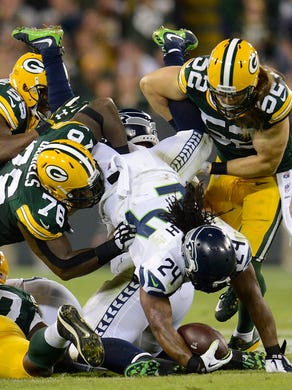 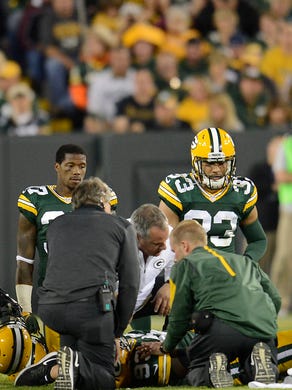 Green Bay Packers quarterback Aaron Rodgers (12) talks to the referee after a delay of game call in the first quarter against the Seattle Seahawks. Kyle Bursaw/P-G Media/@kbursaw
Fullscreen 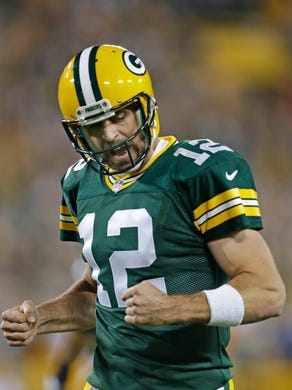 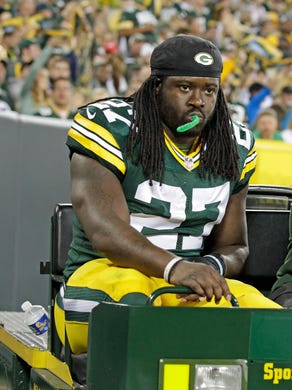 Green Bay Packers running back Eddie Lacy (27) is carted off the field after being injured against the Seattle Seahawks. Wm. Glasheen/P-C Media/@WmGlasheen
Fullscreen

Green Bay Packers defensive end Josh Boyd (93) is helped up to a cart by the medical staff in the second quarter of the game against the Seattle Seahawks. Kyle Bursaw/USA TODAY NETWORK-Wisconsin
Fullscreen 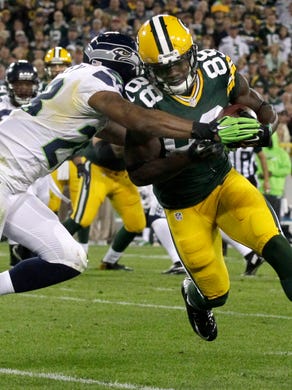 Children run around the field after playing catch while tailgating outside of Lambeau Field in Green Bay. Kyle Bursaw/Press-Gazette Media
Fullscreen

Neenah resident Will De Bruin throws while playing bags with John Schumacher as they tailgate outside of Lambeau Field in Green Bay. Kyle Bursaw/Press-Gazette Media
Fullscreen

Vince Kasparian of Appleton poses for a photo at the sportscaster booth in the Sunday Night Football bus. Dan Powers/P-C Media/@powrpics
Fullscreen

Gaston was active for last week's opener at the Chicago Bears, but the Packers were returning defensive end Datone Jones against Seattle. Jones missed the opener with a one-game suspension. The Packers carried five defensive linemen on their game-day roster.

Outside linebacker Andy Mulumba also was activated after being on the inactive list against the Bears. Mulumba gave the Packers an extra special teams contributor.

» The Packers set a regular-season Lambeau Field attendance record with 78,433. That was two people more than the previous mark, set in the Nov. 30 game last season against the New England Patriots.

» Second-year linebacker Jayrone Elliott came up with the “two biggest plays of the fourth quarter,” according to McCarthy. Elliott intercepted a Russell Wilson pass with 6:50 left in the game. On the next Seattle possession, Elliott essentially ended the game by forcing a Fred Jackson fumble that was recovered by Micah Hyde with 32 seconds left in the game.

» Green Bay’s offense appeared out of sync in the first half. Miscommunications forced the Packers to call their third and final timeout of first half with 1:24 left in first quarter.

» Seattle linebacker K.J. Wright was ejected from the game with 6:42 left after ripping the helmet off a Packers player. Also on the play, Green Bay’s T.J. Lang and Seattle’s Michael Bennett were called for offsetting unnecessary roughness penalties.

Ryan Wood contributed to this report.