The hits keep coming for the Green Bay Packers’ offense. 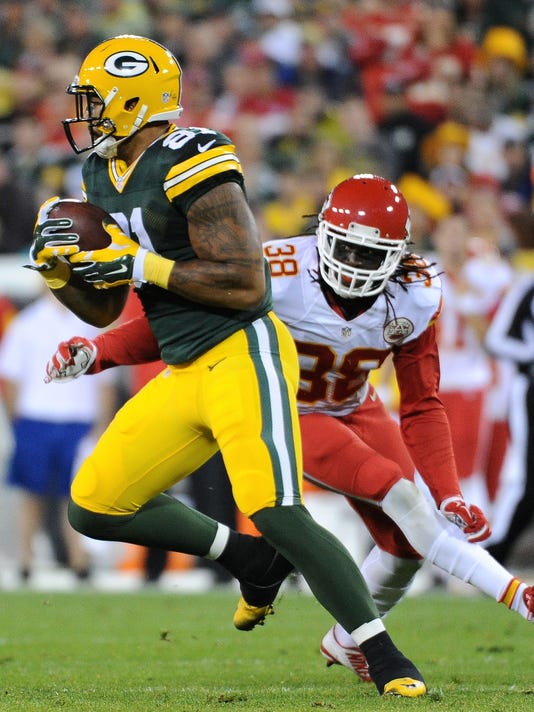 The hits keep coming for the Green Bay Packers’ offense.

The injury occurred when Chiefs cornerback Marcus Peters hit Quarless in his left knee at the end of a 7-yard catch in the second quarter. He walked to the locker room on his own power, but didn’t return.

If there’s any silver lining, the injury wasn’t to his surgically repaired right knee that he blew out in December 2011 and sidelined Quarless for the entire 2012 season. He’s since played in 38 consecutive games over the past two-plus seasons with 22 starts.

“Andrew was in there this morning,” Packers coach Mike McCarthy said. “Just had a chance to visit with him. I know Dr. McKenzie and him visited. He’ll definitely be challenged this week. He has a knee sprain. I don’t think he will make it this week.”

Quarless enjoyed a career year in 2014 when he caught 29 passes for 323 yards and three touchdowns. He impressed quarterback Aaron Rodgers during the offseason program, which led to Rodgers singling Quarless out as one of the offensive veterans who have stepped into leadership role.

The latter part of the offseason was more turbulent for Quarless, who was arrested in Miami Beach, Fla., on July 4 for allegedly discharging a firearm in public. His case has been pushed back to Oct. 25 and he still could be subject to league discipline.

Quarless returned to Green Bay for the start of training camp, but then missed the first two days of practice grieving the death of his daughter at birth. After a quiet preseason, he caught his first two passes of the regular season against the Chiefs, totaling 14 yards.

His injury leaves the Packers with two healthy tight ends on the active roster with starter Richard Rodgers and rookie Kennard Backman, who’s been inactive for the first three games. They could also promote Justin Perillo from the practice squad. He was active for two games last season.

Backman captured the No. 3 tight end job over Perillo and rookie Mitchell Henry on the strength of his final week of camp, which included a sure-handed 20-yard catch through traffic in the Packers’ preseason finale against New Orleans.

-Like they did for the NFC championship game in Seattle, the Packers will travel a day earlier than usual for this Sunday’s game against San Francisco. While they usually go out on Saturday afternoons, the Packers will leave on Friday and presumably conduct their final practice in the Bay Area.

“There’s two ways of doing most things in this league,” McCarthy said. “Getting acclimated to the environment, crossing time zones, we look at all of those things in the offseason. I don’t want to get into specifics – everybody does it a little differently – but it’s part of our preparation.”

It’s not believed any of their current injuries are season-ending, so they’ll likely have to release someone unless they utilized their temporary injured reserve exemption. McCarthy seemed to suggest the team received a short-term roster exemption for Guion.