Defensive lineman back on the practice field after serving three-game suspension. 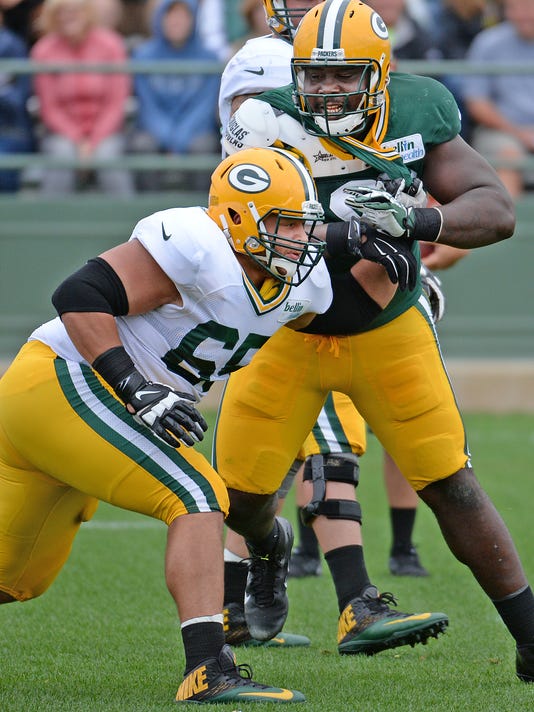 The NFL granted the Packers a roster exemption that allowed the 6-foot-4, 315-pound defensive lineman to practice without needing to immediately clear a spot on the 53-man roster. They'll need to make a determination by the end of the week.

Guion, 28, was suspended days before the start of training camp under the league’s policy regarding substances of abuse. It stemmed from his Feb. 4 arrest in his hometown of Starke, Fla., for felony possession of marijuana (roughly 3/4 of a pound) and carrying a firearm in the presence of a felony. His legal situation cleared up in March when he reached a plea agreement of no contest that included him paying a $5,000 fine and having the charges dismissed, but it wasn’t until July that his suspension was finalized after a failed appeal.

Guion said he wasn’t surprised the league didn’t reduce his three-game ban and has moved on from it. Grateful for the Packers’ support through the process, Guion said he’s turned his focus to getting back into the rotation on the defensive line.

“I’m very excited,” Guion said. “Most of all I’m excited to get back out there with the fellas and start to play some football.”

The suspension cost Guion a chance at a long-term contract after a career year in which he had 32 tackles and 3½ sacks. He settled on a one-year, $2.75 million deal with Green Bay that didn’t include a signing bonus. He lost more than $125,000 because of the three games he missed.

Guion remained in Green Bay after the end of training camp. He wasn’t eligible to practice with the team, but had access to the weight room and facilities. He spent most of his days lifting and working on his conditioning.

You still can’t simulate practice reps or in-game snaps. That was evident last summer when Guion missed most of training camp with a hamstring injury and struggled in his first three starts at nose tackle in place of an injured B.J. Raji.

“You can only really play it in your mind,” Guion said. “It’s not the same when you’re out there because you’re actually going against guys who are going against you.”

The Packers will activate Guion from suspension at some point this week, but it’s conceivable they could wait until after Sunday's game in San Francisco to put him on the game-day roster. Despite losing Josh Boyd for the season to a broken ankle, Green Bay has five other defensive linemen available in Raji, Mike Daniels, Mike Pennel, Datone Jones and Bruce Gaston.

In the long run, the Packers are confident Guion will be able to help their defense again. He’s versatile enough to play anywhere on the line and should be motivated to earn the long-term extension he missed out on this offseason.

“It’s going to be great to have Letroy back to give us another body to rotate, more solid against the run,” outside linebacker Julius Peppers said. “We’ve been pretty solid, but he’s going to help us get better, so we’re definitely looking forward to getting him back out there.”

Guion returned to Green Bay shortly after the arrest and continued to train at Lambeau Field throughout the offseason. He understands the mistakes he's made, but is grateful for how the organization stood by him during the process.

"It’s big to have the Packers’ supporting me and being behind me the whole time," Guion said. "It gives you confidence and gives you a peace of mind that you can stay focused on the task at hand."