Packers coach Mike McCarthy spoke to the media on Thursday morning before practice. Here are some highlights: 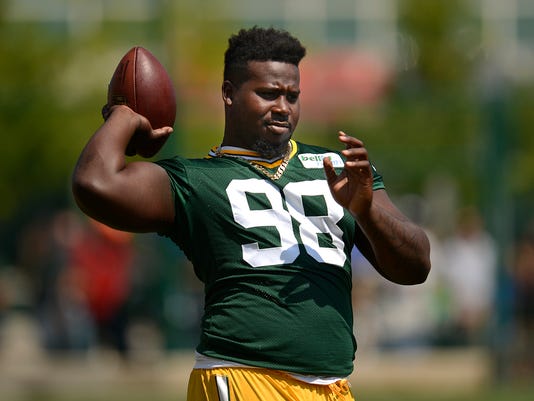 Packers coach Mike McCarthy spoke to the media on Thursday morning before practice. Here are some highlights:

We’ll have 46. I’m confident in that. Getting better.

Looks good. Strength and conditioning standpoint, I think he’s in excellent shape. We’ll see how practice goes, but he looks good. … Not having the benefit of being in pads … (but) he’s played a lot of football. He’s a veteran important to cut him loose.

Return game has been good. We haven’t gotten a lot of opportunities. When we have we’ve been able to get it out past the 20. Blocking has been good. We’ll continue to get better with drop angles. Number of players moving in and out.

Energy is great. Energy is great inside, too. This is a huge mental preparation week for us. I think that’s obviously coming off a Monday Night Football game.

Each and every week you have a rush plan.

On benefit of combining quarterbacks and receivers room:

It’s really just organizing your staff by responsibility. It’s something that’s really been in place here for a number of years. We just wanted to make sure it’s a full-time operation. The interactions between players and coaches is important. It’s helped our teaching environment and guys are ready to go.

He didn’t give us a whole lot in practice, so I was going off the recommendations of our medical staff. Those are decisions I really don’t get involved with unless it’s crunch time whether a guy can go. That was clearly off the recommendation. … He would’ve been inactive if I didn’t think he could play.

On Rodgers’ use of free plays:

I think it’s like anything with the quarterback position. It’s the most difficult position to play in all of sports. Obviously, he’s good at it. He’s improved at it over time. The whole unit has improved. It’s a credit to the whole offense because he’s not always doing it with the same people. Good work for our defense. It’s a form of a scramble drill or extended plays.

And your defense doesn’t jump:

Definitely (helps). Aaron is great with the cadence. He does a phenomenal job with that.

On game-planning the cadence:

Watch TV. You can hear it. The cadence is available to the opponent.

Getting better. We’ll see how he moves in pre-practice.

He was injured. He had a bicep injury.

On Andrew Quarless designated to return:

You weigh that. That’s obviously part of the conversation. We’ve been in the situation. Quarless is definitely a core player for us. I’m glad it exists and think it definitely helps us with number of guys we have nicked.