There is only a “slight” hope Green Bay Packers receiver Davante Adams will play this week at the San Francisco 49ers, coach Mike McCarthy said Friday. 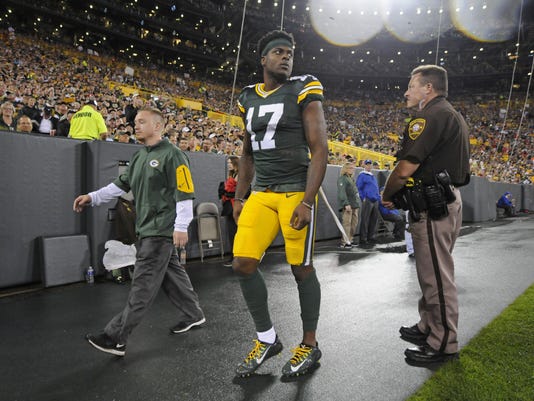 There is only a “slight” hope Green Bay Packers receiver Davante Adams will play this week at the San Francisco 49ers, coach Mike McCarthy said Friday.

Adams was knocked out of Monday night’s game against the Kansas City Chiefs after the opening possession when he reaggravated his sprained left ankle. He was seen wearing a walking boot in the locker room earlier this week, and was still limping in the locker room Friday.

“It’s getting there,” Adams said when asked how his ankle felt. “It’s just hurting. We’re just trying to fight through whatever we can so we can it get right.”

Adams was noncommittal when asked about his status Sunday.

Adams has been unable to practice this week. The Packers will practice for the final time Saturday in the Bay Area. Their flight to California left Friday afternoon.

“He’s going to have to jump around tomorrow. Jump through some hoops,” McCarthy said. “We’ll see how it goes.”

Adams is among the Packers’ top three receivers, mostly lining up on the perimeter. He initially injured his ankle during the team’s Week 2 win against the Seattle Seahawks and had been questionable to play against the Chiefs. He has nine catches for 92 yards and no touchdowns in limited action through the first three weeks.

As a rookie last year, Adams had 38 catches for 446 yards and three touchdowns.

With Adams’ ankle limiting him, receivers Randall Cobb and James Jones have compensated with highly productive starts to their season. Both are tied for second in the NFL with four touchdown catches apiece. With 20 catches, Cobb is on pace to surpass the 100-reception mark for the first time in his career.

“Yeah, they’re balling,” Adams said. “They’re going to do what they’ve got to do. I’ve got to get right.”