Highlights of Mike McCarthy's time with the media Friday morning. 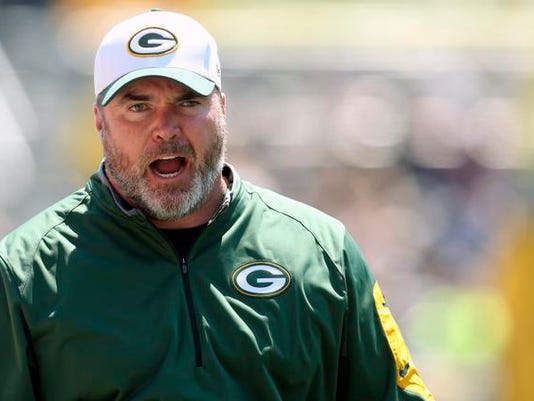 Green Bay Packers coach Mike McCarthy addressed the media for a final time Friday before his team flies out to the Bay Area for its game Sunday at the San Francisco 49ers. Here are some quick highlights.

On Davante Adams’ chances to play Sunday: Slight. He’s going to have get out and jump around tomorrow, jump through some hoops.

On whether Burnett will travel to San Francisco: Everybody will travel. The only one who won’t travel is Bryan Bulaga.

On Friday schedule with team flying out to West Coast: It’s a normal, Friday schedule. We moved up everything an hour earlier, so we can fly out at 4 o’clock.

On McCarthy playing basketball: Yeah, we played a lot of basketball when we were younger. The whole family, that was our primary sport.

On what position he played: Let’s talk football, OK?

On James Jones’ production: Well, I’m not going to sit here and say I knew he was going to have so many touchdowns, but just watching the tape of him in Oakland and this preseason, I knew he would come back and make the adjustments he made with our offense. I figured he’d be able to adapt fast.

On penalties: We have the same breakdown we’ve always had – the discipline penalties, the combative penalties. The presnap penalties are too high.

On deciding to go for it on fourth down: Every situation in the game is broken down with statistical information prior to the game, and also there is statistical information that’s calculated in the pregame. That’s all part of your decision-making process. Those are all things that are taken into account when you make those decisions, and you really need to make those decisions early in the series. On third down, it’s my responsibility to tell Tom this is four-down territory.

On 49ers’ special teams: Very good special teams unit. Very aggressive. They’ve got a number of guys who can run.

On Packers’ offensive line: I think our offensive line has played excellent. I said it in the past, last year’s offensive line was clearly the best we’ve had in our time in Green Bay. I think this group has a chance to surpass that.