Shields, Rollins sit out of practice

Shields, Rollins sit out of practice 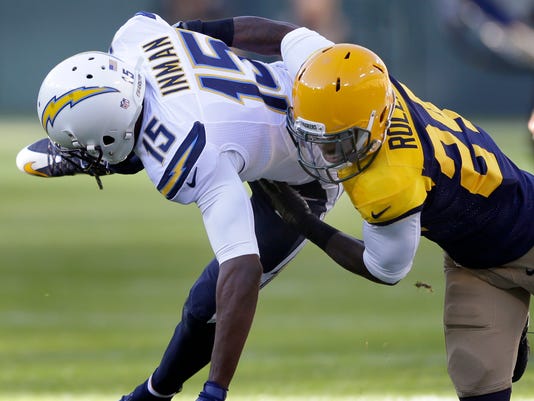 The Green Bay Packers may need to solve their lingering problems on defense without two of their top cornerbacks this Sunday in Carolina.

Sam Shields (shoulder) and Quinten Rollins (neck) were the only non-participants in Thursday’s padded practice at Clarke Hinkle Field. Both sustained their respective injuries in the first half of Sunday’s 29-10 loss to Denver and didn’t return.

If Shields can’t play, rookie Damarious Randall likely would start opposite Casey Hayward at cornerback with Micah Hyde in the slot of the nickel sub-package. Boundary cornerbacks Demetri Goodson and LaDarius Gunter may also factor into the game plan for the Panthers.

Linebacker Clay Matthews (ankle/knee) and receiver Ty Montgomery (ankle) continued to practice. Matthews didn’t seem to have any issue running or cutting in the portion of practice open to the media. Montgomery still appeared slightly hobbled by the injury that forced him out of the Broncos’ game.

The full practice report will be announced later this afternoon.