Injury report swells to 15, but no Rodgers

Six estimated as non-participants after Sunday's game against Minnesota

Injury report swells to 15, but no Rodgers 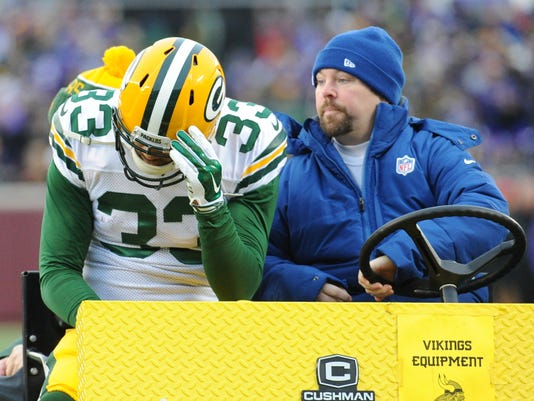 Green Bay Packers strong safety Micah Hyde (33) is taken off the field on a cart against the Minnesota Vikings at TCF Bank Stadium in Minneapolis.(Photo: Jim Matthews/P-G Media/@jmatthe79 )

The Green Bay Packers will bring a banged-up roster into their Thanksgiving night showdown with the Chicago Bears.

Although the Packers didn’t practice Monday, they were required to submit estimated designations and listed 15 players who likely would have sat out of or been limited if they practiced.

Linsley and Hyde left with injuries in the first half of Sunday’s 30-13 win over Minnesota and didn’t return. While Pennel was a new addition, Bulaga and Abbrederis aren't surprising. Bulaga has been limited in practice over the past month and Abbrederis already is expected to miss this week’s game.

Montgomery’s status might be the most concerning. The rookie receiver hasn’t played since sustaining a high-ankle sprain before the bye week. He appeared to be nearing a comeback last week before aggravating it during last Thursday's padded practice and missing his fourth consecutive game.

Running back Eddie Lacy no longer was listed with the groin injury that forced him out against Detroit, but now has an ankle injury. He was hobbled during a slow start to the first half of the season after tweaking his ankle against Seattle. He left momentarily against the Vikings, but still managed to a season-high in both carries (22) and rushing yards (100).

Two players who dropped off the injury report were quarterback Aaron Rodgers (right shoulder) and left tackle David Bakhtiari (knee). Rodgers was limited in last Wednesday’s practice with an injury to his throwing shoulder, but said after Sunday’s 30-13 win over Minnesota that it came through fine.

For Chicago, tight end Martellus Bennett (ribs) was estimated as a non-participated. Running back Matt Forte (knee) and receiver Alshon Jeffery (groin) were listed as limited after sitting out of Sunday’s 19-17 loss to Denver.