Linsley, Montgomery sit out of practice

Linsley, Montgomery sit out of practice 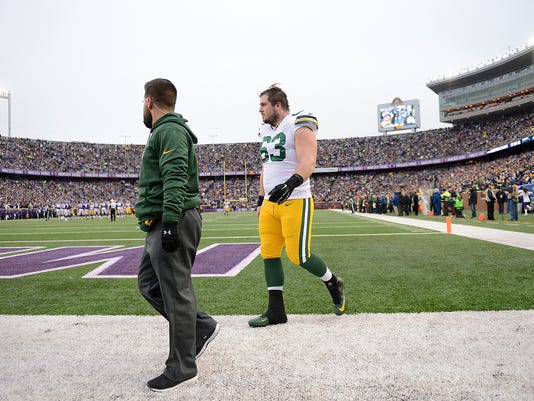 The Green Bay Packers featured 15 players on their estimated injury report Monday, but only three were unable to suit up for Tuesday’s practice.

JC Tretter would start at center if Linsley can’t play Thursday against Chicago. Receiver Jeff Janis likely would step as No. 4 receiver and kickoff returner if Montgomery can’t go. Abbrederis’ absence was expected as he’s expected to miss a few more weeks.

Defensive back Micah Hyde (hip), who was carted off the field Sunday, started practice with his positional group before going inside the Hutson Center. Tackle Bryan Bulaga (knee) and defensive lineman Mike Pennel (quad) both practiced after being estimated as non-participants Monday.

Safety Morgan Burnett, receiver Davante Adams and running back Eddie Lacy were practicing after showing up on Monday’s injury report with ankle injuries.

Adams and fellow receiver Randall Cobb joined veteran James Jones in donning hoodies at practice. Jones wore one Sunday and broke out of a month-long slump with six catches for 109 yards and a touchdown.

Tight end Andrew Quarless has yet to return to practice, though he was eligible to be activated off temporary injured reserve this week after tearing his MCL against Kansas City in Week 3.