With the NFL scouting combine beginning Tuesday in Indianapolis, mock draft season is in full swing. Here’s a look at some early projections on who will be chosen by the Packers with the 27th pick in the first round April 28: 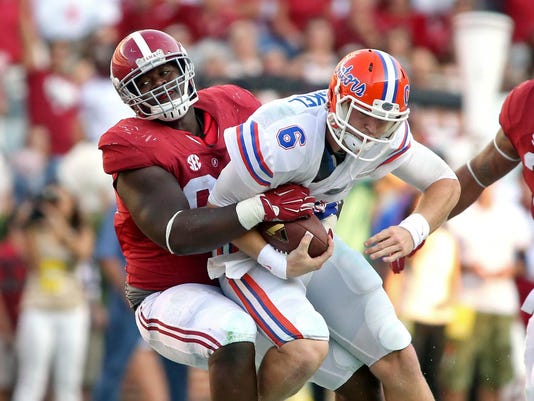 With the NFL scouting combine beginning Tuesday in Indianapolis, mock draft season is in full swing. Here’s a look at some early projections on who will be chosen by the Packers with the 27th pick in the first round April 28:

Mel Kiper, ESPN: The Packers need more weapons for Aaron Rodgers, but they do get Jordy Nelson back from injury and Henry offers a matchup threat as a big-bodied pass-catcher who can get extra yardage after the catch. We’re long past the point where we discount the idea of a tight end as a true weapon. Henry can help this offense.

Todd McShay, ESPN: This is not a deep TE class, so the top prospects could come off the board earlier than expected. Henry is an underrated talent, partly due to playing in Arkansas’ run-heavy offense. At 6-foot-5 and 253 pounds, he has the body type to make plays down the seam, and he has shown the intelligence to find holes in zone coverage. Aaron Rodgers needs an upgrade at TE, and Henry would give him another weapon in the passing game.

Pete Prisco, CBS Sports: With Clay Matthews moving back outside, they need a run stuffer on the inside. Ragland can do that.

Dan Kadar, SB Nation: If Ragland doesn’t time well at the combine, it’s possible that he’ll slide this far in the draft. We’ve seen it with middle linebackers before. That’s not to say he won’t be a good player. He should start from Day 1 in his NFL career and produce. But he plays at a position where the draft process is unkind.

Eric Edholm, Yahoo: There are some high grades out there on Billings, and he doesn’t turn 21 for another month, which is viewed as both a negative and a positive. He is still improving and remarkably could add quickness and strength to what appears to be one of the more powerful frames in college football. But Billings also is regarded as immature and in need of guidance. A veteran Packers defensive group could help that, as could Billings being away from some of the distractions of his native Waco. This is a fascinating player who could play a number of positions up front but works best inside.

Bucky Brooks, NFL.com: If B.J. Raji departs as a free agent, GM Ted Thompson could add another big body to the front line to help solidify the Packers’ run defense.

Dane Brugler, NFLDraftScout: Even with Mike Daniels locked up long-term, Reed is worthy of this pick with his versatility that fits Green Bay’s odd front.

DJ Boyer, DraftSite.com: Massive Jarran Reed would contribute immediately for Green Bay; Darron Lee gets a long look from the Packers if Reed is unavailable.

Chris Burke, SI.com: Listed at 231 pounds, Floyd probably is not going to overpower many (or any?) blockers as a pass rusher. He still gets home with regularity thanks to his technique. In addition, he also has experience in all phases of the game at LB, including dropping in coverage.

Charles Davis, NFL.com: With questions looming about B.J. Raji’s return, this big man can plug into the middle of the Packers’ defense.

Daniel Jeremiah, NFL.com: The Packers need to get younger and more athletic off the edge. Dodd is just scratching the surface of his potential.

Lance Zierlein, NFL.com: Clark still has some holes he’s working on, but he’s athletic and has freakishly long arms. Green Bay understands that they have to improve at the tackle spot and Clark has a very high upside, but a scary floor as well.

Jason McIntyre, The Big Lead: The Packers have other needs, but he just feels like a Packers or Patriots player. Injuries ruined his 2015 season, but man this kid is talented.

Luke Easterling, Bleacher Report: Both inside and outside linebacker are a possibility here, but need and value meet more closely along the defensive line for the Packers in this scenario. With B.J. Raji’s future unclear, Green Bay could use a young nose tackle to build around up front, and Louisiana Tech’s Vernon Butler could be just the man for the job.