Will Barclay fit into Packers' plans?

Will Barclay fit into Packers' plans? 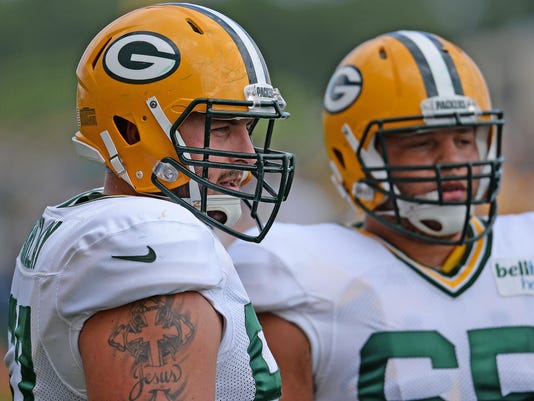 Fourth in a daily series looking at the Green Bay Packers' free agents in advance of the start of the 2016 league year March 9.

The Green Bay Packers struck gold in 2012 when they unearthed Don Barclay as an undrafted rookie out of West Virginia.

Barclay, who signed for a modest $2,500 bonus, beat out seventh-round pick Andrew Datko to join Evan Dietrich-Smith as the only backup offensive linemen on the Packers’ 53-man roster. By season’s end, both were in the starting lineup with Barclay stepping up for an injured Bryan Bulaga at right tackle.

He proved to be a good insurance policy for Bulaga and wound up starting all 18 games in 2013 after Bulaga blew out his knee in training camp. While not as strong or athletic, Barclay possessed a mean streak and battled to the whistle.

A daily look at the Packers' free agents

But the 6-foot-4, 305-pound lineman encountered his own adversity in training camp in 2014 when he tore his anterior cruciate ligament and missed the season. After a lengthy rehab, Barclay returned and won a reserve job on the 2015 roster.

Only this time, things didn’t go according to plan. Barclay struggled in three September starts in place of Bulaga (knee) and was ill-equipped to handle left tackle when Packers coach Mike McCarthy plugged him in against Arizona in Week 16 when David Bakhtiari (ankle) sat out with an ankle injury.

Two weeks later, the Packers started backup center JC Tretter at left tackle and the former Cornell standout held his own against Washington in the NFC wild-card playoffs. Tretter’s ability to play all five positions makes him the top candidate to fill the sixth-man role on the offensive line going into 2016.

So where does that leave Barclay? He’s scheduled to hit unrestricted free agency next month and will turn 27 in April. The Packers appreciate his tenacity and work ethic. It’s why they extended him a one-year, $1.54 million contract as a restricted free agent even when he was coming off knee surgery.

At the same time, the Packers are poised to return their starting offensive line, Tretter, restricted free agent Lane Taylor and Josh Walker. There’s also a strong possibly they’ll add another lineman in the draft with starting guards Josh Sitton and T.J. Lang, Bakhtiari and Tretter all scheduled to hit free agency after next season.

Barclay navigated the season without any setbacks and should be stronger a year removed from reconstructive knee surgery. In a few weeks, it will be up to general manager Ted Thompson to determine whether that’ll happen in Green Bay.

The stats: 16 games (five starts) with four penalties (one accepted).