Jaylon Smith on Packers: 'I love them'

Jaylon Smith on Packers: 'I love them'

Ryan Wood and Pete Dougherty discuss inside and outside linebacker prospects, including Jaylon Smith. 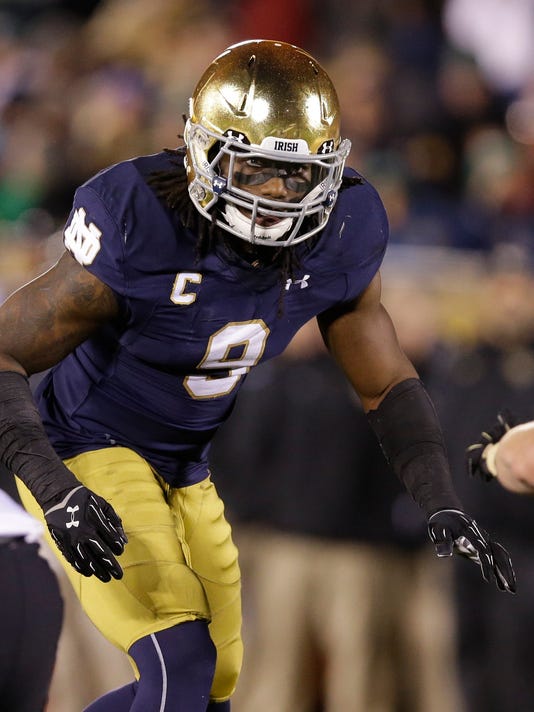 "Yes. Yes. I love them," Smith said Friday. "Mike McCarthy … wow. That was a great interview."

Smith said the Packers are one of 23 teams he will formally interview with this week at the NFL scouting combine. Most prospects are willing to share their interview schedule with reporters, but it’s rare to be so openly excited about a meeting.

There’s plenty for the Packers to like about Smith. He’s a rare linebacker who can be play similar to how the Packers used Clay Matthews. Smith, a Dick Buckus Award winner as the nation’s top college linebacker, is equally capable of rushing the passer, defending the run and dropping into coverage.

Smith said he enjoys watching how the Packers used Matthews – "yeah, absolutely," he said – as a versatile linebacker. He’s well aware his coverage ability would be a particularly good fit in Green Bay.

"One thing I bring to the table," Smith said, "is the cover aspect of it as well. So multiple ways that teams can use me. Whoever drafts me, they’re going to get a heck of a player. I love the game of football, and that’s what I want to do."

Of course, there’s a catch.

It’s unlikely Smith will be available when the Packers get their first turn to select a player with the 27th overall pick. He absolutely would be off the board if not for a devastating knee injury last month against Ohio State in the Fiesta Bowl.

Smith said he had surgery seven weeks ago to repair a torn anterior cruciate ligament and lateral collateral ligament in his left knee. No nerves in his knee were stretched, Smith said. He said the knee has “no pain” almost two months into his recovery, and he’s no longer wearing a brace.

"I’ve been off pain pills for almost a month," Smith said. "It’s the matter of the recovery process. I don’t know when the nerve and everything will heal, but it’s just a matter of me taking it day-by-day and controlling what I can control."

Smith’s goal is to return during the 2016 season, but it’s unclear when that might be. His injury happened on New Years Day, and recovery from ACL injuries require nine to 12 months.

Amazing walking without the knee brace six days after being restricted for six weeks and feels fantastic! pic.twitter.com/dAW8OW09Ke

More important than the timetable, Smith said, is how he returns to the field when he’s healthy. With medical advancements, he doesn’t expect the knee injury to prevent him from reaching his potential. Just last year, running back Todd Gurley won offensive rookie of the year with the St. Louis Rams. Gurley missed the season's first three games after tearing his ACL the previous November. Once healthy, he rushed for 1,106 yards and 10 touchdowns.

Smith would like to have similar production as a rookie. Even if he doesn't, Smith believes he'll be that kind of player in his second season.

Two months before the draft, Smith hasn’t conceded he’ll slip to the bottom of the first round. He’s hoping to be a top-10 pick, he said. He views himself as the top overall player in the draft.

If not for the knee injury, Smith would have a legitimate argument to be drafted No. 1 overall. Now, his draft stock is uncertain. He’s still a near lock to be a first-round pick, but draft day will be much more interesting.

Smith said he’s aware teams have to consider his knee when determining where risk meets reward. Perhaps that’s another aspect that would fit with Green Bay. The Packers, a Super Bowl favorite, are one of the few teams who can be patient.

"It’s a long-term decision for whoever drafts me," Smith said. "I’m a guy who will be around for a while playing at an elite level. An impact player. It’s great watching a guy like (Rams running back) Todd Gurley do it last year, and come back almost mid-season and perform. It’s very encouraging."