Veteran kicker was scheduled to hit free agency next Wednesday. 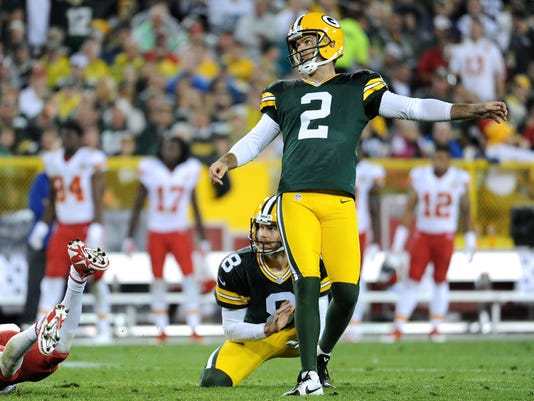 The Green Bay Packers agreed to a four-year contract with their 10th-year kicker on Tuesday, according to his agent Mike McCartney. The deal is worth $16.1 million and includes a $5 million signing bonus, an NFL source confirmed.

At $4.025 million per season, Crosby now sits behind only New England’s Stephen Gostkowski ($4.3 million) for highest average-per-year salary among NFL kickers, though that doesn’t include Baltimore’s Justin Tucker, who was given a franchise tag worth $4.572 million on Friday.

The deal ensures the Packers will have their franchise career points leader under contract through the 2019 season. It came hours after the deadline passed for NFL teams to apply franchise and transition tags to players scheduled to be unrestricted free agents on March 9. It was the sixth consecutive year Packers general manager Ted Thompson hasn't utilized the tag.

Crosby, who’ll be 32 in September, got his career back on track over the last three seasons following a disastrous 2012 season in which he made only 21-of-32 field goals (63.6 percent). He outlasted Giorgio Tavecchio the following summer to hold onto Green Bay’s kicking job and hasn’t looked back.

The Packers’ patience paid off. Crosby has made 84 of his 98 attempts (87.4 percent) since 2013 and holds the active NFL record for consecutive made field goals in the postseason (20). He also was one of only four kickers to not miss an extra point in the regular season or playoffs in 2015.

Crosby expressed his happiness about the deal in a tweet.

I've been off the grid for the afternoon. I am so happy to be back with @packers, thank you for all the love. #Packers#lovinlife

Re-signing Crosby was the Packers’ top priority going into free agency. Crosby, who’s made 79.7 percent of his field goals (236 of 296) in nine seasons with the Packers, surpassed Ryan Longwell in Week 2 against Seattle as the franchise career points leader. He finished last season at 1,145 points.

Crosby missed his only potential game-winning kick in 2015 — a 52-yarder against Detroit in Week 10 — but made 24 of his 28 field goals and was voted a playoff captain for the fourth time in his career.

Packers quarterback Aaron Rodgers expressed his approval of the deal, and Crosby reciprocated.

@AaronRodgers12 thanks bro. I wouldn't want to be anywhere else. I get to watch you do your thing and finish off the drives. #lovinlife

The Packers managed to get the deal done with Crosby without using the franchise tag. Thompson has used it only twice before, on defensive linemen Corey Williams (2008) and Ryan Pickett (2010). Williams was traded to Cleveland for a second-round pick, while Pickett eventually agreed to a long-term deal.

A daily look at the Packers' free agents

Last season, Crosby ranked 11th among NFL kickers in average salary ($2.95 million) based on the original structure of his contract. That drops to 15th if you consider his 2013 restructure as a new contract ($2.45 million), according to OverTheCap.com.

Crosby was slated to be the top kicker on a market headlined by aging kickers Josh Brown (36 years old), Adam Vinatieri (43) and Phil Dawson (41). The only kicker under 30 who was on an active roster all of last season was St. Louis’ Greg Zuerlein, who made only 20-of-30 attempts (66.7 percent).

The Packers have plenty of room to maneuver under the salary cap, which was officially set at $155.27 million last week. After carrying over $6.9 million from 2014, Green Bay had roughly $21.6 million available prior to Crosby re-signing.

Cornerback Casey Hayward, defensive lineman B.J. Raji, and outside linebackers Mike Neal and Nick Perry would appear to be the highest profile players remaining. Hayward, 26, likely would have been a top target in previous years if the Packers weren’t loaded at cornerback.