Starks back with Packers on 2-year deal

The Green Bay Packers are sticking with a familiar complementary tailback to play behind Eddie Lacy.

Starks back with Packers on 2-year deal 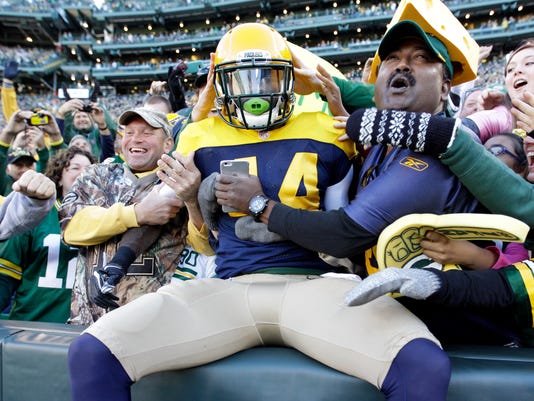 The Green Bay Packers are sticking with a familiar complementary tailback to play behind Eddie Lacy.

Starks, a sixth-round pick in 2010, has turned his career around over the past three seasons after an injury-riddled start. He hasn't missed a game in two years and had career year in 2015 with 601 rushing yards and 392 receiving yards. His 993 yards from scrimmage not only were the most in his career, but Starks also had 47 more offensive yards than the starter Lacy. He added five touchdowns, three on the ground.

It wasn’t a perfect year for Starks. A spat of fumbles late in the season tested coach Mike McCarthy’s patience. Starks fumbled four times in the Packers final five regular-season games, losing two. His five fumbles last season were as many as he’d had in his previous four seasons combined.

The 6-foot-2, 218-pound running back received interest on the free-agent market despite turning 30 years old last month. He recently took a visit with the New England Patriots before coming back to Green Bay. A close friend of Lacy, Starks' return removes a potential need from high on the Packers' draft board and ensures the team keeps its one-two backfield tandem intact for at least another year.

When Starks is taking care of the football, his quickness and speed serve as a nice complement for Lacy’s powerful, downhill style. A lightning and thunder combination that will stay in Green Bay for at least another season. Over the past two years, he's developed as a legitimate weapon as a pass-catcher in the backfield and vastly improved in pass protection.

While Starks' age might concern some, he only has 661 career touches in his first six NFL seasons. The backup role also has helped him stay healthy after knee, hamstring and ankle injuries threatened his career during his first three seasons in Green Bay.