Inside linebacker Sam Barrington did not participate in drills Tuesday. 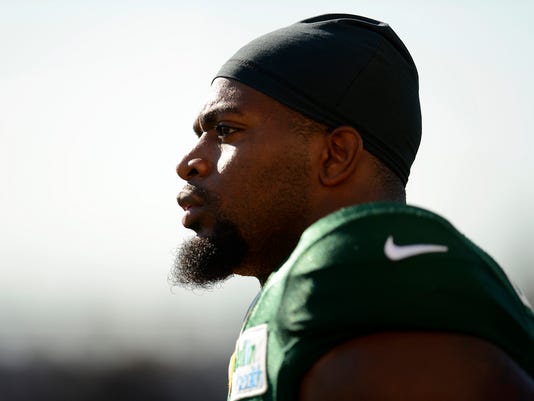 GREEN BAY - Inside linebacker Sam Barrington did not participate in drills Tuesday during the Green Bay Packers’ organized team activities session, but after missing all but one game in 2015 because of a foot injury suffered in the season opener, he’s used to waiting.

“It takes an immense amount of patience,” said Barrington, who took part in stretching with the team and then observed the OTA. “You have got to be patient, and within that patience, you have to find ways to get better every day. It’s been an interesting journey. It’s not over. I have some more patience, I guess, to display. I’m having fun with it.”

Barrington said he is looking forward to the time when he can be “all the way out there.” He stayed in Green Bay and around the team even after sustaining his injury in the Packers’ Week 1 victory at Chicago, so he feels right at home.

“Sam’s a guy that spent all year around here; I think he absorbed as much as he could not being on the field,” Packers defensive coordinator Dom Capers said after the OTA. “I know he’s probably more excited than anybody to be back out there working again.” Now it’s just about getting back to practicing in full and staying healthy. There was no update on Barrington's timetable to return, but coach Mike McCarthy said during the NFL owners meetings in March that the 25-year-old linebacker was "doing good" with his recovery.

“You have to be tedious in your rehab,” Barrington said. “If you fix this and you fix that and you fix this, you are not really worried about when you get back out there. It’s the difference between confidence and cocky.

“If you are confident, it’s because you equipped yourself with the things that make you confident. So I feel physically confident right now, instead of cocky where it’s like, ‘I don’t know what’s going to happen but I’m going to act like I’m fine.’ I feel confident right now in the way I feel, so it’s a good feeling to have.”

Barrington is a favorite to earn a starting spot at inside linebacker as he enters the final year of his contract. He established himself as a three-down linebacker late in the 2014 season, finishing with 39 solo tackles and a sack.

“Sam two years ago played very well for us in the second half of the season,” Capers said. “We thought he really was on the right track and then he had the unfortunate injury in the first 10 plays of the opener.”

Barrington and last year’s fourth-round pick, Jake Ryan, are atop the depth chart with the team expected to move Clay Matthews back to the outside.

The Packers didn’t use an early pick on the position in last month’s draft, although they did select Stanford’s Blake Martinez in the fourth round and added Mississippi State’s Beniquez Brown as an undrafted free agent.

Barrington isn’t worried about anyone taking his job. In fact, he plans to help the rookies. He believes his top priority is to be a good teammate.

“These guys are doing a great job already,” said Barrington, who will receive a Humanitarian Award from Pop Warner on May 28 for the way his achievements on and off the field inspire youth across the country. “You can tell they all have a great football IQ, to be rookies coming into this thing. It’s just been fun watching them.” 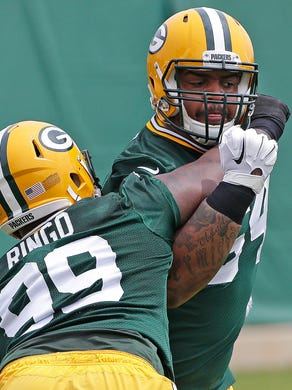