Outside linebacker Lerentee McCray, who joined the Packers as a street free agent, has opened some eyes with his bull rush. 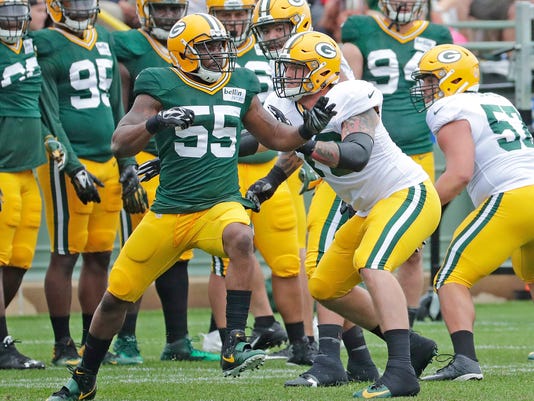 GREEN BAY - Around this time last year, offensive lineman Josh Walker began an experiment that sought to capitalize on his combination of size and athleticism. At 6-5½ and 328 pounds, but with decent fleetness of foot, Walker kicked out from guard to tackle as the coaches split his reps for the remainder of the season.

One year later, Walker has slid back to guard on a semi-permanent basis. His first rep at tackle took place Sunday, while the Green Bay Packers practiced inside Lambeau Field, and unfortunately for Walker he ran into an edge rusher in a groove.

Outside linebacker Lerentee McCray, who joined the Packers in April as a street free agent, has opened some eyes with his bull rush during the first few practices of training camp. His most impressive display took place Sunday, when McCray, who stands 6 feet 2 and weighs 246 pounds, slammed into Walker during an 11-on-11 drill. Walker staggered back, and McCray slid deftly to his right for what would have been an easy sack on quarterback Brett Hundley. (Hits on the quarterbacks are not allowed during practice.)

What makes McCray’s bull rush successful is the amount of power he generates before making contact with an offensive lineman. He lunges off the edge with tremendous force, legs driving and churning as his arms brace for impact. He lands his hands high, near his opponent’s armpits, and so far in camp the collisions have turned linemen's spines convex.

McCray said he learned to bull rush during his collegiate career at Florida, when Dan Quinn, now the head coach of the Atlanta Falcons, served as the defensive coordinator and defensive line coach.

Though he ran a pedestrian time of 4.80 seconds in the 40-yard dash, which is likely why he went undrafted, McCray lists speed as his No. 1 tool off the edge. He believes his reputation as a speed rusher increases the efficacy of his bull rush.

“In the pass rush I just take what they give me,” McCray said. “Sometimes they play for my speed and I’m able to beat them with speed, but if not, I just turn it into power.”

Injury report: Offensive lineman Matt Rotheram entered the locker room Sunday with a large bag of ice strapped to his right ankle. Rotheram said he injured the ankle during Saturday’s practice and had a difficult time moving inside Lambeau Field.

“I know it’s safe to play on," Rotheram said, "but it’s one of those things where you get out there and you’re thinking about it."

Running back James Starks missed the final portion of practice with cramps.

Josh James (undisclosed injury) was the only player to miss practice who did not begin camp on the PUP list.