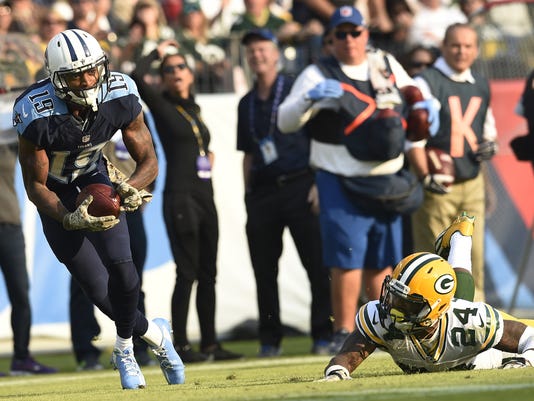 First down: Cornerback Quinten Rollins’ bad day started early. On DeMarco Murray’s 75-yard touchdown run on the Titans’ first offensive snap, Rollins was the last man in pursuit and inexplicably let up between the 15 and 10 yard lines before Murray got in the end zone. I’m not positive he could have tackled Murray, but it’s a possibility. And if he’d knocked Murray out of bounds before the end zone, you never know what might have happened — a fumble, a penalty or bad play — that might have taken at least four points off the board. Not sure what Rollins was thinking there. Wonder what he’ll think when he sees that video. Rollins, who started at cornerback, later was benched for coverage mishaps.

Second down: The Packers have to hope that left tackle David Bakhtiari’s knee injury isn’t serious. He’s been one of their best players this season, and the drop-off from him to second-round pick Jason Spriggs was big Sunday. Spriggs played 24 snaps after Bakhtiari was injured and gave up two sacks to outside linebacker Brian Orapko on the same rip move and also had a holding penalty. Spriggs likely would improve with playing time, but that probably would come at a cost on the way.

INSIDER: Thumbs up to Davante Adams

Third down: What a contrast to watch Titans tight end Delanie Walker chug through tackles, compared to what the Packers get from Richard Rodgers after the catch. Walker caught nine passes for 124 yards and was a big factor in Tennessee building an early lead. Late in the first quarter, he picked up 14 yards on a catch when he broke tackles by Morgan Burnett and Demetri Goodson, and then shoved Kentrell Brice to the ground as he picked up another yard before going out of bounds for a 14-yard gain. A couple plays later he shrugged off tackle attempts by Ha Ha Clilnton-Dix and Marwin Evans before LaDarius Gunter wrestled him down after a 19-yard gain. When Rodgers makes a catch, the first tackler almost always gets him to the ground.

Fourth down: The Packers caught a break early when the Titans’ best offensive lineman, left tackle Taylor Lewan, was ejected early in the first quarter for making contact with an official. Lewan swatted aside the official while getting into it with Letroy Guion for the shot Guion took at quarterback Marcus Mariota after Guion had been offside. But the Packers failed to exploit the advantage against backup Dennis Kelly. Their two sacks of Mariota were their only two official hits on him as well, and outside linebackers Nick Perry, Julius Peppers and Kyler Fackrell combined for zero sacks and hits.