The parallels between Mike McCarthy and Andy Reid could extend to the Packers coach departing. 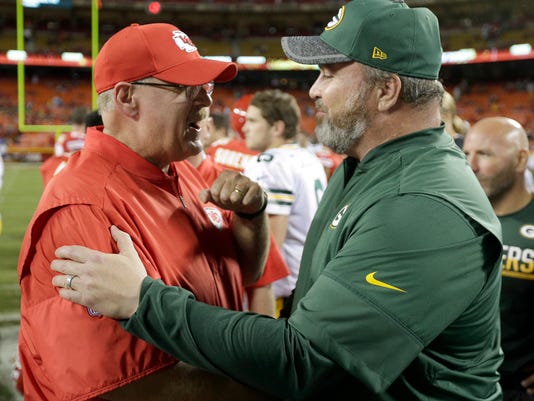 GREEN BAY – Andy Reid gave it his all for 14 seasons in Philadelphia, took a pink slip without recrimination from management and within five days was resurrecting his coaching career in Kansas City.

Unless the Green Bay Packers turn their season around in the next five weeks it’s possible that the eerie parallels between Mike McCarthy and Reid could extend to the Packers coach starting over in another NFL city next year.

It was just 2½ years ago that the Village of Ashwaubenon renamed a 0.6-mile stretch of Potts Avenue as Mike McCarthy. Village officials had considered using McCarthy’s name on other, much longer thoroughfares.

The honor made McCarthy the fourth of the team’s five coaches with a winning record to have a street in Brown County named after him. There’s also Lambeau Street, Lombardi Avenue and Holmgren Way.

Curly Lambeau in 1950, Vince Lombardi in 1969 and Mike Holmgren in 1999 all resigned their positions in Green Bay to coach other NFL teams. McCarthy, whose contract reportedly runs through the 2018 season, wouldn’t depart voluntarily from a job he has called the best in the league.

The Packers started the season with the best odds to win the Super Bowl, according to Bovada Sportsbook. They’ve lost five of the last six games and have fallen to 4-6, leaving them and the Carolina Panthers as the two most disappointing teams in the NFL.

“The team is obviously in a funk and it doesn’t look as if they can get out of it,” an executive in personnel said after watching the Packers’ 42-24 loss last Sunday night in Washington. “They have players, but the coaches cannot seem to get them to play.

“When a player the caliber of (Clay) Matthews is rendered useless, it shows that there is no urgency whatsoever on the team. The fact is amazing because of the talent on the team. That comes back to coaching.”

The Packers haven’t played a great game since Week 2 of the 2015 season. They probably still have a chance to win the NFC North because Detroit and Minnesota have flaws, but that likely would require at least five victories in the final six games.

It’s entirely possible that McCarthy’s future would be determined not only by his team’s record down the stretch but also by its performance level. If the Packers aren’t even competitive, the drumbeat for a coaching change and perhaps the ouster of general manager Ted Thompson as well will only grow louder.

There’s no doubt that some of the 45 members on the Packers’ board of directors already have called team president Mark Murphy to voice their feelings. The volume and intensity of those calls will increase if the Packers continue their downward spiral and are eliminated from playoff contention.

One top personnel man for an NFC team said last week that he was surprised there was considerable fan unrest in the NFL’s smallest city.

“How can they make changes?” he said. “They’ve been in the playoffs seven years in a row. You usually get raises when that happens.

“Be careful what you wish for. Sometimes a change you just need. But the guy (McCarthy) has done a pretty good job … a really good job.”

He’s also won five division titles, and his 8-7 playoff record is highlighted by the franchise’s 13th NFL championship in 2010.

He won six division titles, and his 10-9 playoff record included five appearances in the NFC championship game. Like McCarthy, he coached in one Super Bowl. Unlike McCarthy, the Eagles lost, to the New England Patriots, in 2004.

The comparison between McCarthy and Reid is appropriate because of their similar records, their similar offensive backgrounds and their unusually long stays, at least in this era, with one team.

When owner Jeffrey Lurie fired Reid the day after the Eagles finished 4-12 in 2012, his 14 years in Philadelphia made him the NFL’s longest-tenured coach.

Today, McCarthy’s 11 seasons in Green Bay place him third behind Bill Belichick’s 17 in New England and Marvin Lewis’ 14 in Cincinnati.

It’s understood in the NFL coaching profession that you’re effectively hired to be fired. The Packers, with just two coaches in the last 17 years, have been immune to the spate of terminations that afflict almost every other franchise every few years.

Axing a Super Bowl-winning coach such as McCarthy would be a big deal. However, it might not spawn the bitterness that the firings of Bart Starr, Lindy Infante, Ray Rhodes and Sherman did.

McCarthy, 53, would land on his feet within a matter of days. It’s almost a foregone conclusion that he would have his pick of NFL openings, and many of his assistant coaches probably would go right along with him.

Reid, the tight ends coach for five years and quarterbacks coach for two under Holmgren in Green Bay, was fired in as kindly a manner as one could imagine.

Lurie met with Reid, reminisced about their wonderful run together and hugged him. Reid didn’t appear at a news conference but Lurie did, saying he looked forward to the day the former coach would be inducted into the Eagles' Ring of Honor.

The Arizona Cardinals and the San Diego Cardinals were interested but Reid fell in love with Kansas City, where owner Clark Hunt had fired GM Scott Pioli and coach Romeo Crennel after a 2-14 season.

Reid accepted a five-year contract reportedly worth about $7 million per year, and all seemed to have been forgotten in Philly.

“I have nothing but good things and good experiences in Philadelphia,” Reid said in his introductory remarks. “Phenomenal people. I can leave saying we had some great years there, man.

Reid’s son, Garrett, was found dead of a heroin overdose in a dorm room at the Eagles’ training site early in his final season. Holmgren advised Reid that he should step down for his own welfare.

Reid would hear none of it, and plunged ahead into what became a disastrous last year amid reports of players quitting and internal strife. The Eagles’ four victories were by a total of six points.

Six months later, ESPN dispatched a reporter to Chiefs camp in St. Joseph, Mo., and found a much happier and stress-free coach.

“When you’re some place a long time, you know the routine, and sometimes getting out of that routine can be good. Brings a little energy, maybe.”

Reid, who was the Associated Press coach of the year in 2002, could have won the award in 2013 when the Chiefs improved from two wins to 11 and made the playoffs.

Under his steely direction, Reid has posted a 39-22 (.639) record in Kansas City with the ultimate game manager at quarterback in Alex Smith. He’s back calling the plays, which he had given up with the Eagles in about ’09, and watching as GM John Dorsey, his former colleague in Green Bay, picks all the players.

When Reid successfully ran off personnel chief Tom Modrak after his third draft in Philadelphia, he would serve as his own GM until being fired.

All personnel decisions are made by Thompson, which is the essential difference between McCarthy in Green Bay and Reid in Philadelphia.

It’s a close call which of the two is better organizationally, designing an offense, directing a staff, teaching and motivating players, leading and calling plays.

McCarthy probably runs a crisper game on Sundays. Reid puts McCarthy to shame when it comes to the performance of special teams.

Perhaps the two best moves Reid made in Philadelphia occurred in his first four months with the hiring of Jim Johnson as defensive coordinator and the drafting of quarterback Donovan McNabb. McCarthy inherited Brett Favre and Aaron Rodgers, and has leaned heavily for the last eight years on his own veteran defensive coordinator, Dom Capers.

In retrospect, Lurie should have moved on from Reid one year earlier than he did.

In 2011, Reid stepped out of character to assemble the free-agent cast quarterback Vince Young dubbed the “dream team” that included ex-Packer Cullen Jenkins. It was a catastrophe at 4-8, but when the Eagles swept their last four games for a .500 finish a disappointed Lurie still brought Reid back for 2012.

Turnover differential, the vital barometer of winning and losing, reveals so much about Reid and McCarthy.

That minus-38 was worst in the NFL in 2011-'12. Sherman was fired in Green Bay after his turnover differentials were the exact same minus-14 and minus-24 in his last two years.

Why is Reid winning now with Smith as his quarterback and without running back Jamaal Charles for the bulk of a second straight season?

Because he’s regained his touch with plus-42 in turnover differential over the last 3½ years, second in the NFL to Seattle’s plus-43. Kansas City went from minus-24 under Crennel one year to plus-18 under Reid the next.

Dennis Green was plus-53 in his first seven seasons with the Vikings before minus-37 in his last three seasons got him fired.

Pittsburgh’s Bill Cowher was plus-80 in his first 14 years before minus-8 in 2006 led to his departure.

Baltimore’s Brian Billick couldn’t survive minus-17 in 2007 after piling up plus-35 in his first eight years.

As a beat-writing neophyte, I used to think turnovers were in large part luck. Holmgren’s demands in this area changed my thinking, but then McCarthy took it to an entirely new level.

From 2006-15, McCarthy’s Packers ranked second to New England at plus-92. The third-place teams were way back at plus-36.

McCarthy told me several times that good fortune has nothing to do with turnover differential. As I’ve learned, securing the football and taking the football away are byproducts of organizational emphasis, superior coaching and discipline throughout the ranks.

McCarthy is well aware why the Packers are where they are. At minus-6, Green Bay is tied for 26th in the NFL in turnover differential, a statistical neighborhood that everyone in the industry understands leads to failure and lost jobs.

When long-time coaches lose the attention of their players, turnover differentials and seasons flutter out of control. Reid experienced what McCarthy appears to be experiencing now.