The team for the ages … well, at least for this generation … the New England Patriots, made a comeback unlike any the Super Bowl has seen.

Patriots quarterback Tom Brady hoists the Lombardi Trophy for the fifth time, most of any quarterback ever. Richard Mackson, USA TODAY Sports
Fullscreen

Winning the Super Bowl appears to be one of the rare things that can get Patriots head coach Bill Belichick to crack a smile. Daniel Powers, USA TODAY Sports
Fullscreen 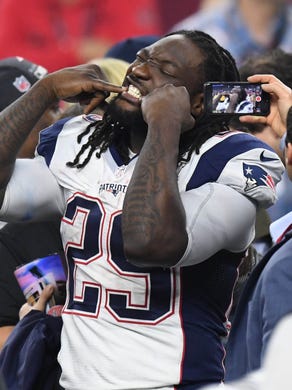 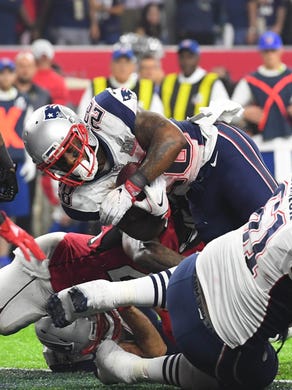 Patriots quarterback Tom Brady (12) picks himself up after a fourth-quarter sack as the Falcons celebrate behind him. Matthew Emmons, USA TODAY Sports
Fullscreen 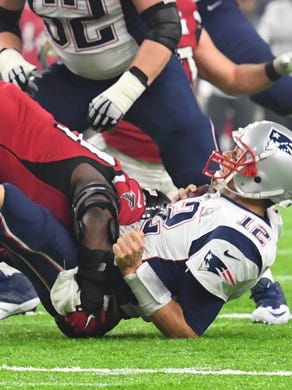 Patriots running back James White (28) stretches across the goal line to score between a trio of Falcons defenders during the third quarter. Richard Mackson, USA TODAY Sports
Fullscreen

Patriots quarterback Tom Brady (12) pulls it down and runs for a first down during the third quarter. Mark J. Rebilas, USA TODAY Sports
Fullscreen 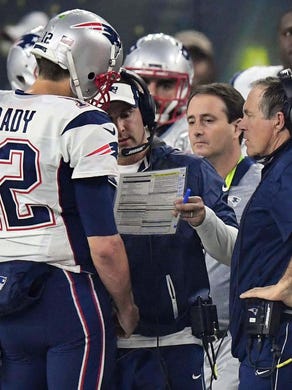 Falcons cornerback Robert Alford (23) takes his second-quarter interception all the back for a touchdown. Kevin Jairaj, USA TODAY Sports
Fullscreen

Patriots quarterback Tom Brady tries to pick himself up off the turf after throwing a pick-six during the second quarter. Kirby Lee, USA TODAY Sports
Fullscreen

Patriots quarterback Tom Brady (12) picks himself off the turf after throwing a pick-six during the second quarter. Robert Deutsch, USA TODAY Sports
Fullscreen 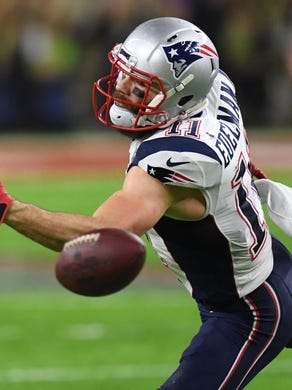 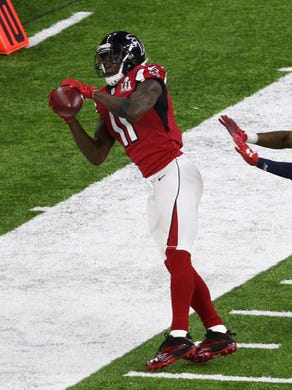 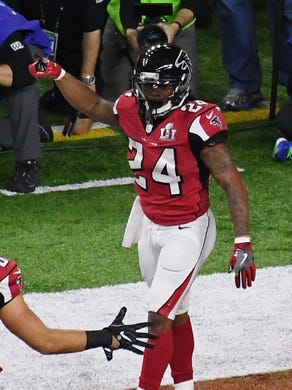 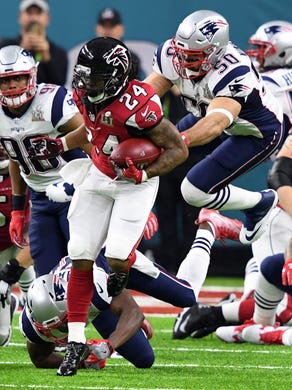 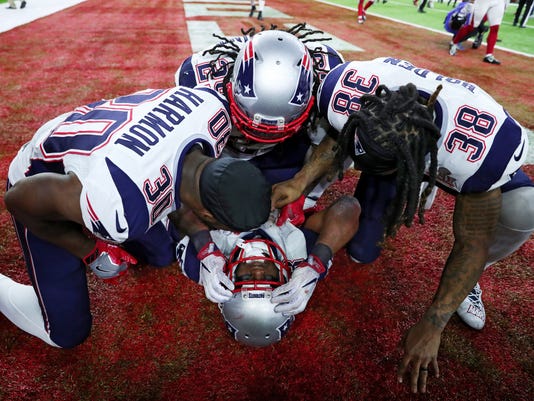 James White is mobbed by teammates after scoring the game-winning touchdown on a two-yard run in overtime of Super Bowl LI.(Photo: Getty Images)

HOUSTON - They played one for the ages Sunday night at NRG Stadium.

The team for the ages – well, at least for this generation – the New England Patriots, made a comeback unlike any the Super Bowl has seen.

Down but not quite counted out, the Patriots rode the clutch right arm of quarterback Tom Brady to overhaul the Atlanta Falcons, 34-28, in overtime.

New England (17-2), the top seed in the AFC, won the 51st game by overcoming a 25-point deficit, 15 more than the previous high in Super Bowl history. Atlanta (13-6), the second seed in the NFC, suffered the most crushing defeat in its 51-year history.

It was the third-largest comeback in playoff history, trailing the 32 that Buffalo overcame to beat Houston, 41-38, in a 1992 wild-card game and the 28 that Indianapolis overcame to upend Kansas City, 45-44, in a 2013 wild-card game.

The largest comeback in NFL regular-season history is 28 points.

RELATED: No way for Falcons to get over this collapse

RELATED: Edelman's catch one of greatest ever in Super Bowl

RELATED: MVP should have been White, but had to be Brady

“To get down, 28-3 … we’ll remember this for the rest of our life,” said Brady, who won his record fifth Super Bowl and was named MVP for a fourth time. “It was hard to imagine us winning.

“At halftime, we weren’t down at all. As the game went on, it was tough on the defense to slow us down.”

Patriots coach Bill Belichick captured his fifth Super Bowl, all with Brady at the throttle. That’s a coach-quarterback record, one shared in postseason annals by Green Bay’s Vince Lombardi and Bart Starr.

Belichick is 5-2 in Super Bowls as a head coach and 2-1 as an assistant in a 42-year NFL coaching career.

James White, the unheralded third-year running back from Wisconsin, carried six times for 29 yards and two touchdowns, including the game-winner from 2 yards out. He also caught a Super Bowl-record 14 of 16 targeted throws from Brady for 110 yards and one score. His three touchdowns tied a Super Bowl record and his 20 points scored set a new mark.

“He’s everything you want in a football player,” Brady said. “Hell of a game he played. He was awesome. We just kept going to him.” 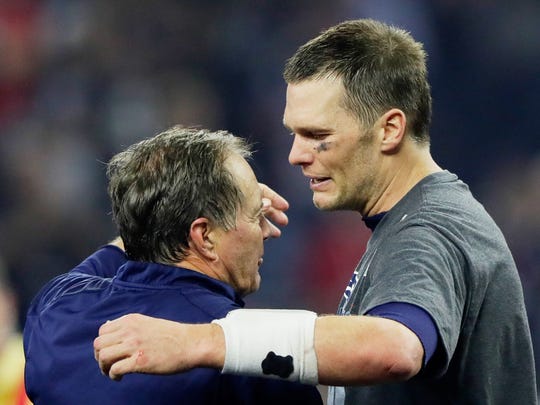 Atlanta, playing in its second Super Bowl and first since 1998, collapsed on defense. In the end, a defense that became the first in Super Bowl to start four rookies gave up 546 yards and an astounding 37 first downs.

No team had ever won the Super Bowl after ranking worse than 25th in points allowed (New York Giants, 2011). Atlanta, which ranked 27th in points allowed, 25th in yards allowed, 32nd in red-zone defense, 26th in sacks and 26th against the run, proved that it's tough to win a title with a defense just along for the ride.

POLL: What QB would you want at his peak?

“The mistakes we made ended up costing us,” said coach Dan Quinn. “We needed to come away with points in both of those (fourth-quarter) drives.
We were close. Very close.”

“Tom’s an assassin,” Patriots defensive end Chris Long said. “He just did it. You go from how it ends maybe to we just made history. We absolutely, positively made history.”

Brady's passing numbers made history, as well, with his 43 completions, 62 attempts and 466 yards all Super Bowl records.

The first quarter was little more than a feeling-out process. Neither team advanced inside the other’s 45, and each quarterback was sacked twice. There were four possessions and four punts.

Brady’s best throw of the first half, a 27-yard toss to Julian Edelman on an over-and-up route against cornerback Robert Alford, put the Patriots at the Atlanta 27.

On the next play, however, LeGarrette Blount ran off left tackle and into the grasp of inside linebacker De’Vondre Campbell. Fellow rookie Deion Jones, the team’s other inside linebacker, reached in from the side and yanked the ball loose at the 29. Alford recovered.

Suddenly, the Falcons became unstoppable. They had just 10 plays in the second quarter but the net was 133 yards and two touchdowns.

Having not targeted Julio Jones in the first two possessions, Ryan started by going to his brilliant wide receiver inside despite clinging coverage by cornerback Logan Ryan. Jones managed to hang on and the gain was 19.

On the next play, Jones motioned inside and ran a deep corner route against Ryan for 23. Ryan’s pass, thrown before Jones was out of his break, was perfect.

In rapid succession, Devonta Freeman went 15 on a toss right, 9 on a cutback inside and 5 on a bounce outside for the TD.

Starting from their 38 after a poor punt by Ryan Allen, Ryan continued blistering the Patriots’ secondary behind steady protection.

When Ryan read a slot blitz quickly, he found Taylor Gabriel open behind it for 24. Jones followed by dotting the sideline with his toes for a reception worth 18 on a bootleg left.

Rookie tight end Austin Hooper, another of the Falcons’ seemingly endless supply of weapons, took strong safety Patrick Chung deep into the end-zone corner. It took a terrific breakup by Chung to deny that 19-yard TD.

Ryan went back to Hooper on third and 9 from a “trips” formation to the left. The Patriots double-teamed Jones on that side, leaving Hooper man against Chung once again.

Again, Ryan threw early but in a perfect spot where only Hooper could get to the ball. The rookie adjusted beautifully on the slot seam route in the back of end zone and it was 14-0.

New England followed by moving 52 yards in 15 tortuous plays. Nothing came easy. Three of the its five first downs came on third-down incompletions in which three Falcons – Alfred once and nickel back Brian Poole twice – were penalized for holding.

Finally, on third and 6 from the 23, Brady was under pressure as he fired a tad prematurely toward Danny Amendola, who was working inside. Alford dropped his coverage, jumped the route and intercepted in front of Amendola at near point-blank range.

Brady, 39, didn’t have the legs to cut him off and Alford was off on an 82-yard TD jaunt, the second longest in Super Bowl history behind James Harrison’s 100-yard runback in February 2009.

Stephen Gostkowski’s 41-yard field goal as time expired made it 21-3 at halftime.

Atlanta increased its lead to 28-3 with 8½ minutes left in the third quarter on a 6-yard pass to Tavon Coleman. At that point, Ryan’s passer rating was a perfect 158.3. 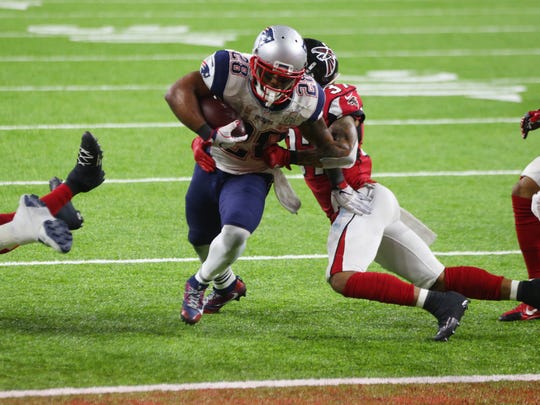 New England's James White scores the game-winning touchdown on a 2-yard run in overtime of Super Bowl LI. White, the former Badgers star, had a Super Bowl-record 14 catches for 110 yards and a touchdown and also rushed for 29 yards and two touchdowns. (Photo: USA TODAY Sports)

The Patriots converted a fourth-and-3 enroute to a 5-yard TD catch by White, the former Badger. However, Gostkowski’s conversion attempt clanged off the right upright.

Atlanta moved to the New England 42 but a third-down sack forced a punt. The Patriots drove 72 yards but were denied a TD on a pair of sacks by Grady Jarrett, who tied the Super Bowl record with three in all.

That really was the play that led to the Falcons’ downfall.

Brady had the Patriots in the end zone in five plays, Amendola beating cornerback Jalen Collins in the left corner from 6 yards out. A run by White for 2 made it 28-20.

Ryan, whose final rating was 144.1, hit Freeman for 39 and Jones for 27. The latter was the result of an all-time sideline catch at the New England 22, putting the Falcons in ideal field-goal range.

However, Freeman lost 1 on a toss and, on second down, defensive end Trey Flowers sacked Ryan for minus-12.

Ryan then hit Mohamed Sanu for 9, which would have set up Matt Bryant for a 44-yard attempt. Left tackle Jake Matthews was penalized for holding defensive end Chris Long, sending the Falcons back 10 more and a third and 33.

When Ryan tossed incomplete, the Falcons had to punt and Patriots took over at their 9 with 3:30 remaining.

On third and 10, Chris Hogan caught a slot out for 15. Brady then went to Malcolm Mitchell for 11.

Edelman made a miraculous catch among three defenders and off one of their legs. The gain was 23.

By then, Atlanta’s defense was finished. White picked up 13 on a check-down against zone coverage, and then seven on a poorly defended seam route to the 1. White slashed inside for the TD, and Brady’s 2-point pass to Amendola on the left side was true.

Fifty-seven seconds remained but the Falcons returned the kickoff only to their 11. Ryan passed for one first down, but three plays gained only 4 yards and Quinn punted at the end of regulation.

New England won the overtime coin flip, and in the next nine plays Falcons defensive coordinator Richard Smith couldn’t even get the Patriots to a third down.

Brady threw incomplete just once. The longest gain was 18 yards to Hogan.

A 13-yard pass interference against Campbell eventually gave New England first down at the 2. Defensive end Vic Beasley broke up an end-zone pass before White scooted wide right and ran through a tackle by free safety Ricardo Allen for the winning score.

“Two years ago it came down to Malcolm (Butler) making the play,” Brady said. “It took a lot of great plays. That’s why you play to the end. It’s a 60-minute game.”

In this case, it was a 63 minute, 58 second game. As usual, Brady, Belichick and the Patriots prevailed.

SUPER BOWL ADS: How they rated